Everybody must be familiar by now with the latest goon approach to law enforcement out in the west, which, like law enforcement in general, has taken a "shoot 'em up" approach to justice found in most third world countries which do not know the rule of law or the rights of man. You know, places where due process is something that happens to wheat flour and not a right guaranteed by our Constitution.

It says something entirely wrong when the federal government moves militarily against people for no other reason than because the government has the power. Very often, power alone is not enough to guarantee the outcome in these little dust-ups. Our history, as all history, is rife with examples of what happens when a government overreaches. John Brown lost a battle that day in the Shenandoah Valley but what he wanted was accomplished within a few years in the bloodiest war in our nation's history. The federal government was on the wrong side at Harper's Ferry when they marched in to suppress rebellion. They had to do it then but they missed the opportunities to end it without bloodshed. It is instructive to note that the two federal officers in charge at Harper's Ferry were Lieutenant Colonel Robert E. Lee and Lieutenant J.E.B. Stuart.

In my opinion, it is just a matter of time now until the country reaches a point where the Army has to be called in again. Not to keep the peace, as they have done since the founding of the country, but to suppress rebellion. It's a sad state of affairs when you have militarized the police to the point where they think they can rule by decree because they believe they have the big guns and law on their side and yet it is the police that requires the Army to intervene after the police have goaded the people into shooting them.

It's hard to believe nowadays that American Presidents ordered the Army to suppress the police in those southern states that believed that might made right and that law was a tool lawmakers and politicians could use to bash enemies of the state.


We had two flavors of Anti-Submarine Rockets (ASROC). There was the atomic bomb tipped version and an ordinary high explosive torpedo ASROC. In this movie, the Bedford Incident, both sides went nuclear because of a mistake in an intense heavily armed environment. Waco was not a one off. It is what police have been arming themselves for ever since Waco and MOVE ON in Philadelphia. There is an old expression that charges that a man who goes looking for a fight will always find one. We're just days away from the 40th anniversary of the shootings at Kent State when a lot of people were looking for a fight.

America would be far better served, all of us, if the regulators and bureaucrats did not have their own police and their own courts of the star chamber and had to use actual law enforcement agencies such as the local police and sheriffs to enforce the law rather than taking it into their own hands.  Coercion and compulsion are not supposed to be virtues in a democratic state. Resisting tyranny is.

UPDATE: Oh sure, not even an hour after I post this, the feds call it a day and go home, they say. 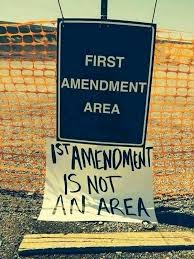