It was due to a confluence of factors from the past that we can now hold ships and their masters responsible for running aground on reefs. The brigs charted the seas for generation after generation and furnished that information to the mapmakers. The ships also did some other good work. I found this article first at Maggie's Farm which took me to American Scientist. When one reads about the myriad cunning artificers of the 17th, 18th and 19th century one doesn't read about the work of the humble men who went down to the sea in ships. It was ships like this that went around the world for centuries and mapped the deeps and, more importantly, the shallows, so that larger ships could follow safely in their wakes and make money and war. They were sailors. Thanks to Anne Bonney for the stear. 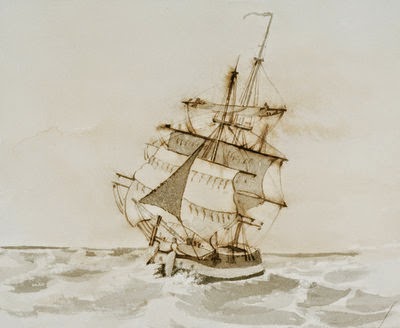 From time to time these ships ran aground or were wrecked by storm and needed repairs far beyond the reach of any shipyard or shipwright so they took their own with them. Like Apollo 13 but without radio. In the event, oftentimes, it is enough and more than enough, to simply get home. Many of these ships and their crews did much more but some of them never came home.

Posted by HMS Defiant at 10:00 AM
Labels: cartography, ships