Picked up the little love of my life on Sunday and brought her home where we've had a great time playing with cousins on the beach and eating and playing with cousins in Del Mar until the wee hours (2045 if that must be defined); she's only 7, as of today. Smart and cute.

In the morning I head off to the doctor who will describe in some detail for me what it means to have: in the left posterior aspect of the posterior fossa a space-occupying extra-axial lesion of CSF density measuring 3.1 x 1.4 cm causing mild mass effect on the left cerebellar hemisphere. Now that's a mouthful. But then, what are CT scans for?

I won't have better days than this one. It was great!
Posted by HMS Defiant at 2:05 AM No comments:

Some things move through a different realm. When one begins to question the networks one moves off them. The media is way more sussed.

and, it sucks to be them anyway.
Posted by HMS Defiant at 3:13 AM No comments:

Once one delves into the code word world one loses touch with reality. SSES would occasionally share some data with us mortals. It was usually pointless but it revealed meaningful capabilities that should have been part of OUR toolkit.

Intel made its own world and then it strained to the max to make it stay in that world. Not much use there. You know, not much value added to the guy fighting the war since all the intel stayed at TS/SCI code word and could not possibly be shared with the guys on the pointy end. Oh, sure the VADM and his intel staff knew it but they didn't/couldn't share it. So how much use was that? It usually boiled down to deploying surveillance units and telling them to be vigilant. Thank you. Vigilant for what? Can't tell you.

I deployed in response to that sort of garbage many times over the last 25 years and it was all garbage. We have signs and warnings they would say. Show me I would say in return and they would toss back that we did not have the need to know what caused the nation to suddenly divert a C5 to the mission of deploying a surveillance unit overnight to the Far East, Middle East. A lot of us held TS/SCI but outside the intel community. We didn't have the need to know.

All the spies and operatives burned to death when the top leadership of the spy sheds at CIA and FBI sold out make me question the value of anything we develop beyond the national technical means. Probably we'll find in a year or two that traitors at NSA canceled out a lot of the technical means capabilities too.

As a very old hand I find it absolutely amazing that some soviet agents convinced EVERYBODY to create the SIPRNET and put all that stuff online where it could be drained off every day, every single day.

When I joined up classified was classified, need to know enabled access and it was all controlled. With SIPR, it all went on line. And we told ourselves that was useful. Perhaps. Can you suss out the underlying madness of making a thing a SECRET for national security purposes and then allowing 2 million people access to that secret?

We have gone way down a path that I don't think is acceptable in a republic. SECRET used to be something that caused major damage to the republic if it became known. We used to do annual page checks of secret material and you don't want to know what we did with the TS. Now we've created some organizations into being that routinely classify the local news in Chicago as TS/SCI/code AND we've created organizations beyond the law to execute people beyond the Pale. (look up Pale/Ireland. It had a dreadful meaning once and it ain't based on color though it was most assuredly race based).

There are several networks that combine all that is known that run at different levels of classification. Ask me if I think that the best government sponsored hackers on earth haven't compromised all of them. Go on. Ask.

Still, I used to work for a guy. He was XO and CO of an OCEANUNIT. He told me one day about how the US Embassy in a certain country once delivered his mail to his ship. It came on a host nation bus, unescorted, including all his new crypto. Red spies didn't, don't have to work very hard.
Posted by HMS Defiant at 3:04 AM No comments:

HOW DID THEY SLEEP?

How did the firebombers, the atomic bombers the first city bombers, the starvers and rapists ever sleep at night?

Me to the bomber crew:

So what was it you set out to do at Dresden and Nagasaki?

Them: Kill everyone in a firestorm that would plunge 20,000 children into a cauldron of fire.


there was some kind of war crime for using railroads and gas chambers and not another one for using firestorms.

I'm glad of my service but had they asked me to do this I'd have walked away.

We've had an enormous number of fine outstanding officers who held the keys and the SAPS to get access and launch nukes. I was one once. Now, at 49, I could never do that.

The last century sucked.
Posted by HMS Defiant at 2:53 PM No comments:

I'll see if this one works. I expected no comments really. I'll try it again on the plane to Bahrain. If I have a hard to read/get into book, I save it for the flight to Amsterdam or Heathrow. The boredom of such flights focuses the intellect on what one has brought.
Posted by HMS Defiant at 7:01 AM 2 comments:

Ah,
justthisguy, I dreamed of being alone on the internet. This is a kind of free association blog thing and I had thought that only far east cynic found me. Silly me.

Lex and I were both on active duty together here in SOCAL, he at AIRPAC and me at MESG1. As you say, he is the embodiment of, "thank you sir, but no thank you". On the other hand there are bunches of FOGOS that just got there through shear competence and duration. Lex made the point that he turned down the billets that lead to that end for his family. Back when I was unmarried, childless and ruthless I took every challenging overseas assignment. I loved it! When I got married it stopped. That said, I remember VADM Costello asking the room who was representing AIRPAC and TACTRAGROUP saying it was Lex but he was running a little late and Barry saying, 'good'. I agree. A good man.
Posted by HMS Defiant at 6:52 AM No comments:
I have inherited a very nice chest of drawers but it reeks of cigarette smoke. 30 years after it was removed from the total cigarette environment it reeks from 3 rooms away! Any clothes placed within the drawers stink of cigarettes. The whole damned thing reeks.

When I downsize, this thing is the first thing to go.
Posted by HMS Defiant at 6:32 AM 2 comments:

Listened to some of the music again as my right hand went numb. It's a weird feeling. I'm pretty sure I don't like it.

I really hope that Mattis and Petraeus meet for a sit down dinner at least once a month from now on, one on one. I don't doubt that CENTCOM and JFCOM gave every request from McChrystal their full attention and support. It will be interesting to see how this plays out. Worthless in the end since we're talking Muslims and they're as changeable as stone.

Weird, the right hand is visibly shutting down.
Posted by HMS Defiant at 1:47 AM No comments:

SLEEPING INTO THE CAT SCAN

Serious measures used to make it to the CT Scan in the morning. Bludgeoned into sleep. May take 2 of the damned things.
Posted by HMS Defiant at 11:04 PM No comments: 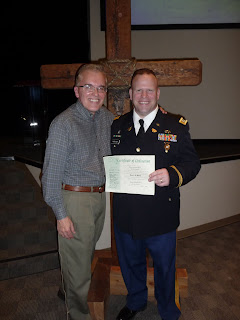 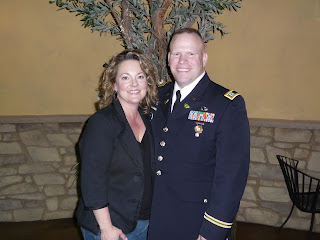 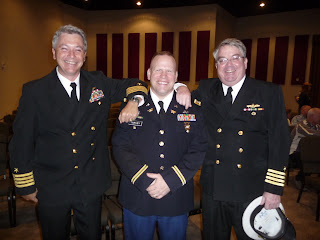 I was recently honored to be asked to attend an Ordination for a friend. Several others I knew were also invited. I was pleased and honored to attend. Guy saved my life, what else did I have to do that evening..... Yep. Easy.

Here's a couple of shots from the evening. Good man bound on a good voyage. As I told him, he is surrounded by good company so we can all expect the best. There will be dark moments but he has already weathered some of those. I expect he'll clear the horizon and come home every time. Strikes me as a very good man.
Posted by HMS Defiant at 7:01 PM No comments:

HOW TO DO IT

My dad took me aside when I was commissioned, by him, and gave me some perfectly good advice. I would recommend it to anybody seeking a commission in our armed forces.

1. Don't ever measure yourself against your peers.
2. Always just do the very best job that you can do.

Worked for me. Making Flag is a personal ambition that I never had. That's a fire that must burn within from the time one is an Ensign. That is all 'contacts', and 'perfect jobs', and schmoozing and there are people to whom this comes naturally. Not me, not grandad.

I was certifiably ruthless until I got married, 22 years into a navy sort of career. The ruthless got a tweak at that point.
Posted by HMS Defiant at 9:33 PM 3 comments:
Newer Posts Older Posts Home
Subscribe to: Posts (Atom)