THINK OF THE CONTEXT

It is to laugh out loud.

“This is wrong,” Hagel said in remarks prepared for delivery in New York.

“Not only does this violate the states’ obligation under federal law, their actions have created hardship and inequality by forcing couples to travel long distances to federal military bases to obtain the ID cards they’re entitled to,” he said.

"This is wrong." The Pentagon still wants to tell you what is right and what is wrong. 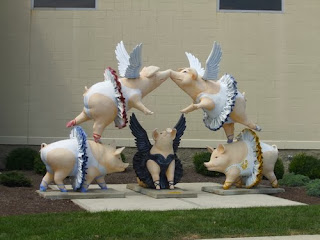 Makes you wonder don't it? Why do people have to travel to states far away to get a stinking badge? Are there not federal offices blighting every city in the land? Why can't they issue ID cards? It is all done on computers interconnected to the master DEERS database and eligibility is strictly enforced. Almost exactly like healthcare.gov.

Also, if there is no base in the state there is probably no commissary, no exchange, no MWR and no need for a military ID card anyway since they're used primarily to get on base and anybody can do that now without an ID and the whole no base to get on in the first place thing.

Way to go Chuck!
Posted by HMS Defiant at 10:00 AM
Labels: humor, Schadenfreude