This little gem was one of the systems we used as the model for our initial Joint Capabilities documentation on a completely unsimilar program I once worked on. It was the very model of a cool, well thought out, endless funding stream sort of program that would do very well in sales to our own military and go on to a full and rich career in the Foreign Military Sales program where dictators and tyrants everywhere would delight in bringing their agitators and riotous ones up to oven temperatures just before their heads exploded. 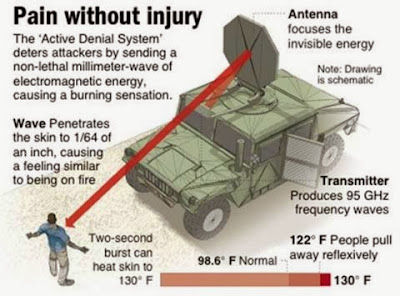 There were a few drawbacks, naturally. The whole deliberate infliction of pain without injury was soon outed as 'waterboarding with a radar range' and the guys in the 5 sided wind tunnel were not impressed with the lab's pitiful argument that this was a force protection system. They knew it for what it was, an endless boondoggle to get another 3 inches of range out of a road portable, self-powered, self-propelled microwave.

I think a few of us also understood that it would only take about 5 minutes before Sheriff Arpaio wanted a couple and then every police force in America would need a half dozen and the next thing we knew they'd be as ubiquitous as the dreaded AR-15 and the forces of order would be compelled to use them on thugs at tea parties and degenerate book thieves.
Posted by HMS Defiant at 4:38 AM
Labels: Death Ray, social war