I suppose everybody in the world except me saw this when it was first aired back in September. 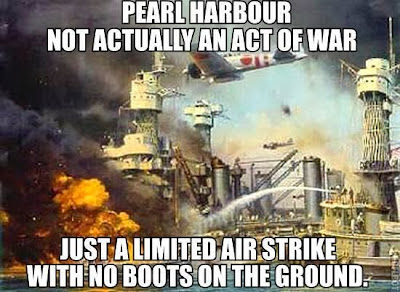 Whoever came up with it I think is brilliant. It absolutely captures the liberal belief that absent boots on the ground we didn't really mean to go to war when we dropped high explosives on you. This is something that the United States does every single day of the week somewhere in the world. But you know know that, otherwise you would not have voted to declare war on Libya, Yemen, Iraq, Afghanistan, Pakistan, Sudan, Somalia, Eritra, Yugoslavia, Serbia, Bosnia, Croatia, Lebanon et al. I remain surprised Obdurate Imbecility didn't do it to Syria. Yet.
Posted by HMS Defiant at 2:02 PM
Labels: America, Democracy, terrorism