I wondered what Coastal Riverine Group ONE does and now I learn from military.com that they are in charge of port and harbor security in San Diego. How the mighty are fallen. Once upon a time, when they were known as

they did port and harbor security all over the world except Europe and parts of the east coast of the United States.

Back then they were an expeditionary security force and mostly left the security of San Diego port and harbor to the Harbor Police and the Coast Guard.

Oh well, things change and if its just coastal and riverine I suppose they can't get much beyond Point Loma on a good day.


UPDATE:
Rainbow Warrior arrived for a visit in San Diego Sunday. You remember her right? She received the unfavorable attentions of French divers while in port. 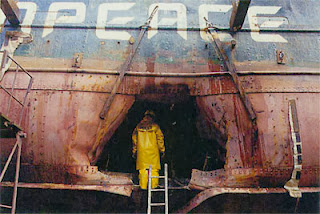 Posted by HMS Defiant at 8:00 AM
Labels: USN