This hardly ever happens. A USN anti-air cruiser was savaged yesterday by a drone that made it past all of the ships many defenses and hit the ship. Back when I did this I asked for the drone to be fired directly at the ship just as fast as the drone could possibly go and just a few hundred feet up because my preferred drone killing missile system used a doppler radar to track targets and it was really good at finding and tracking high speed targets heading directly at it. That eliminated one of the two major reasons that the missile systems failed to work. So, if the missile worked properly, scratch one drone.
In this case it looks like maybe the missile got a piece of the drone but not enough to destroy it short of the ship. My missile system was a short range self-defense sort of system. The cruiser could start shooting at drones 50 miles away. I'm not sure how they got hit since they also have a LOT more missiles and guns and close-in-weapons that eat drones and missiles.

UPDATE
Here is the local TV station video report. There is no report of a missile firing but the navy has established its credibility on these sorts of issues so that doesn't much matter at this point. As Lex would say though, perhaps it was a drone trying to set the record for the closest approach to a ship.  This one tied. 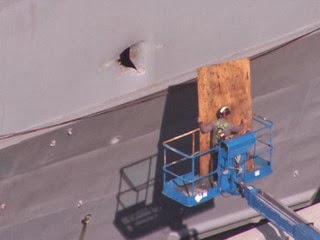 Shooting missiles at ships is inherently dangerous but it needs to be done.