CNN got this all wrong and people will get hurt. It's from CNN's international edition so it will probably only be Canadians and other foreigners like those from Somalia that end of up getting hurt. There are semi-nice places remaining deep in the core and along the lake but one passes through free fire zones to get there.

Visiting Detroit without reason has to rank up there on the scale of hiking in the mountains along the Iran/Iraq border or proselytizing the faith in Pakistan or vacationing in Mali. You could do it but you have to accept that it's a damned risky thing to do without a purpose. You know, if you were in the CIA. It is pretty telling when a story making the rounds only a week earlier comes from the Chief of the Detroit Police who announced that he was very nearly carjacked two weeks ago while driving down the mean streets of Detroit. He is a retired policeman so he is allowed to carry a gun anywhere he wants in perpetuity unlike our Canadian and most Somali visitors. One of his predecessors resigned after trying to carry a loaded gun onto an aircraft in 2003.

Here is Chief Craig on carjackings in his fair city,

"This is the one crime that really drives fear in the community," he said in August while announcing the HeatWave programmed aimed at reducing carjackings and auto theft.

Sgt. Vernal Newson of the Auto Theft and Carjacking Task Force said thieves frequently spot a vehicle they like and follow the motorist to their home or destination before committing the crime." 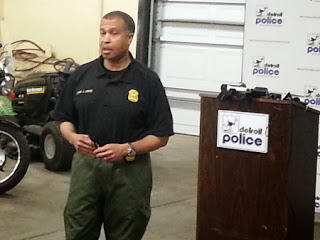 Visit the Detroit Airport. That's a scenic, functional and, surprisingly, a darned nice place to visit.

You know what the Chief's very first concern was after taking the job as Chief and returning to his own hometown? It's here.


"One thing that I've been critical of, as it relates to... the way the good people in Detroit drive, some of them just blatantly run red traffic signals," Craig said in late-July. "And I don't know if they just have total disregard for traffic laws or they're afraid of being carjacked."

What do you think now Chief? A little of both?
Posted by HMS Defiant at 7:30 AM
Labels: civil government, Stupidology