The world appears to have settled into reverse for a bit and I'm trying to ignore it but it bleeds through everything. One literally cannot observe American news without boggling at the stupidity of Hillary Clinton and the concomitant reality that democrats will vote for her en masse because there is nobody else in the field that comes close. Still, this is over the top even for them, isn't it? 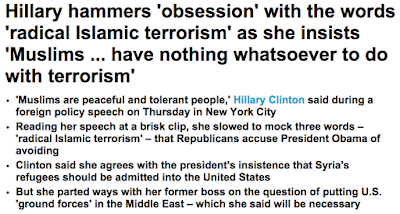 How lost to reality must one be to hold the position that muslims have nothing whatsoever to do with terrorism? I've seen the numbers and they aren't good. A moderate muslim won't lift a finger to stop, hinder or protest the actions of the most fundamental muslim terrorist. That way lies death and they know it. It's always been that way. You thought Salman Rushdie unique because every muslim wants him dead for blasphemy? Think again. Many don't know or care about him but they won't support his right to flout the muslim law that demands he be killed on sight for blasphemy.

It's a bit like global warming hysteria. All of the most detailed and carefully measured data in the world HAS GOT TO BE MASSAGED by warmists in order to force it to correspond to the 'reality' they believe is imposed by their MODELS. That's not reality though. It doesn't even look that way and yet watching the major media and the democrats spin all this fakery is getting old. Like poor Mars, they don't even notice that they are going backward whilst shouting Progress!
Posted by HMS Defiant at 2:09 PM
Labels: cannibals, islam, NPR, Science