I watched a video now making the viral rounds of students sweeping into the library at Dartmouth shouting that only one particular shade of life matters. The shouters were of many races and at least two of the 97 possible sexes (it's hard to tell without the dime novel background story) and they abused the tolerance of people studying in the quiet environment that used to represent a quiet space where it was safe to study. The new klan are virulently intolerant. I don't like them. I dislike their stupid message and I disagree with their idiotic tactics.

I'm afraid I've reached a conclusion about both them and their message. About them, if they suddenly spontaneously combusted in my presence? I wouldn't piss on them. About their message, I don't think they're doing it right.

Does this tactic of breaking into my space and screaming at me prove effective in communicating the putative message? No. I dislike people who do that and by extension I dislike the people the message is putatively about. Did that help further the cause?

I think all life matters. I don't feel the need to go into the trenches to fight for it every single day or even part time. My belief is my belief and it may not correspond all that well with the beliefs of others but so long as they leave me alone, I'll leave them alone. When we conflict, I'm willing to talk about it and discuss it. I won't be shouted at.

I believe that anybody who is sincere about placing a value on life should guard it to the best of their ability. After all, if it has value in the world, somebody else wants it. The right to carry arms and exercise self defense should not be constrained absent justifiable cause such as mental illness, mental unfitness or poor shooting. Nobody could really argue that the mentally unfit should be kept disarmed as much as possible and I think anybody who has been shot and wounded while committing a felony should be denied his/her right to carry. We should expect better shooting from our citizens than leaving wounded felons lying around for collection.

I would expect a tremendous surge in the value of some life and a concurrent diminishment in the value of other life in the early days of such a policy but it would even out over time and all sentient armed life would quickly assume the same value. What could be wrong with that? 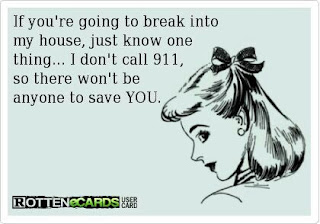