What could they possibly be afraid of? This is just pure meanyism. 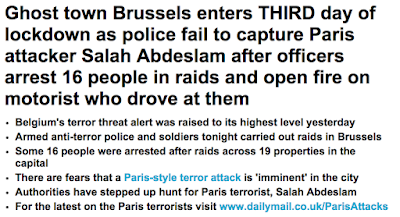 Isn't it odd though that the police everywhere in Europe know some addresses to go to with firepower and attitude after another islamic murder spree...

UPDATE:  I saw this headline at the NY POST just now and thought they were finally going to arm their own subjects and citoyens against the vicious terrorists and killers. Ha! They're just going to send more guns and ammo to the vicious muslim terrorists and murderers in the middle east. Well done thou good and useless Public Servants!

Posted by HMS Defiant at 2:44 AM
Labels: islam, Orcs