I spotted this last night on the way out of the AMC theater at Courthouse where we watched Spectre. Fortunately, the movie had prepared us and while it was a very clever trap, it just wasn't clever enough. 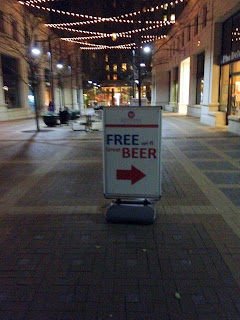 The ladies enjoyed the movie although they declared that one dress was really ugly and an unfortunate choice. We all had to be convinced after long discussion. That was, apparently, one of the dress's flaws. It was too long. Ah well, we live and learn.
Posted by HMS Defiant at 4:30 AM
Labels: art, movie reviews