It is so very rare for a reporter to crouch on a crime scene in midtown Manhattan, well known for its total devotion to privacy and complete absence of any kind of video cameras, and announce with such perfect grace that the police who responded to 3 people being shot at McDonalds, are pursuing a silver car as the shooter. No other salient details are known at this time, to anybody.

The car's status as an autonomous killing machine that seeks out prey in midtown Manhattan was unquestioned and unremarkable. Apparently, cars killing people over arguments in restaurants is not all that uncommon in New York. Thank God New York has limited gun purchases to silver automobiles. 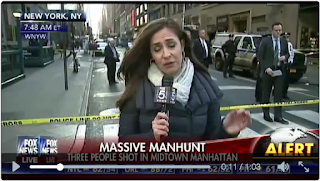 I am not going to another McDonalds unless it is on base or behind security at an airport somewhere. That place just reeks of madness.
Posted by HMS Defiant at 3:35 PM
Labels: Just Say No, Mockery, Orcs