In a remarkable turn of events, Erdogan ordered his American made Air Force F-16s to shoot down a Russian fighter-bomber over Syria. The plucky Putin probably has a few teapots full of polonium and several cases of Bulgarian umbrellas stuffed into the next diplomatic pouch for the Russian embassy in Ankara. Assad suffered a minor injury when he laughed so hard he fell to the floor. 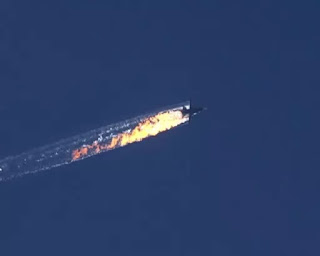 I have heard that we have some sort of treaty with Turkey that binds us to assist them in the event that they are attacked. I am sure that we can count on President Obama to give any calls from them asking for assistance the same due deliberation he has given every other weighty matter of state and take roughly as long as the Keystone Pipeline Decision or Surge II implementation took, given the risks involved. I'm equally sure that the U.S. Army will be willing to entrain the 1st Armored Division at Fort Hood and send them rushing to assist Turkey once they find their weapons, ammo, a few tanks and a reliable bit of train track connecting Fort Hood to Istanbul. The Army has given up on shipping Army Divisions by sea to Turkey for any reason involving national defense or war.

I'd have sent the ready 4th Infantry Division but Turkey has refused them entry so many times they gave up and mailed all their passports back to the State Department. They figure they'll aid Turkey when Hell freezes over and if you think we got global warming going on now, you should visit Kurdistan Hell.

Anybody but OTAN would probably start to wonder if their so called "peace" dividend doesn't bear some resemblance to a check from Bernie Madoff. Sure sure, the peace is in the mail. Trust us.
Posted by HMS Defiant at 10:44 PM
Labels: Flying safety, Schadenfreude, stupid and vicious