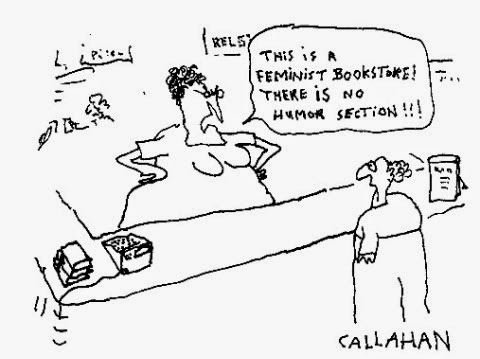 As I read the press these days I am struck with just how on-the-mark that little prescient cartoon was decades ago. Of course there was nothing prescient about it. If you were as brave as a lion and you scratched a feminist 30 years ago, you would find that they bleed outrage and have no humor chromosomes at all. Feminism is a Movement solidly seated on the Group W Bench.


If you think about it, the very worst enemies of the feminist womyn's movement are feminists. They have managed, I think, to relegate their whiny asses to irrelevance. Nobody wants to listen to the permanent complainer class. They have combined to convince many of us that their screeds and impassioned whines of 'SEXISSIM!!!!' can be disregarded because they echo the other whiny class of people who always scream RACISSSSSSSSSSSTTTTT!

It's too bad. I very much prefer the kind of people that enjoy a sense of humor and fun.

Ladies seem to like shoes. I don't know why. We tend to love them even when they wear low heels.


I worry about the girl above. She means the world to me and she is living with one of the most humor impaired people I know. On the other hand, she knows that. She will, reliably, inform her mother that she votes Democrat from now until forever. The fun is learned early in life.