I honestly don't understand what is going on anymore at colleges and universities in America. What happened to the application of justice which was based on a single fundamental principle, if you are the victim of a crime, call the police. When did the police stop investigating rape allegations? Who died and made some university bureaucrat the sole arbiter of a citizen's fate and dismantled all aspects of a legal case and used every means to exclude the law from appearing at the rape hearing?

Glenn Reynolds, the instapundit, has been bringing these stories to my attention. He's been doing that now for over a year which I find incredible. Rape is a serious crime and it is not investigated by empowered university bureaucrats but by police and if the allegations are merited it is tried in a court of law using all the tools that we, as citizens, are allowed and if a man is found guilty, he goes to jail is not merely expelled and branded a sex criminal.

I'd love to know how empowered people somehow decided that there is no longer any presumption to the rule of law in this country. Don't they know it invites a serious backlash? And no, that's no veiled threat about the consequences to coeds from this misapplication of law, it is simple economics. There's a million hungry shark type predators known colloquially as lawyers roaming this country and every single one of them will take a case to sue the endless deep pockets of universities and colleges who really cannot defend themselves in a court of law.

They literally cannot lose in a court of law. I think the universities and the DOJ have done the unforgivable and let the stupid and energetic morons set policy. They're going to rue the day. We wrote the laws that protect the accused for damned good reasons. 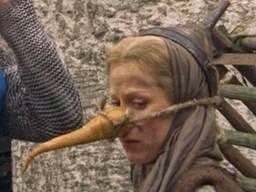 Posted by HMS Defiant at 6:18 AM
Labels: lawfare, stupid and vicious