EVERY THINKING PERSON HATES THEM

I was a little surprised when I read this story today. How odd that every thinking soul hates Palestinians except for the cretins in the Department of State and the White House. Somebody once said of them that they never miss an opportunity to miss an opportunity. [English is fun. One could read that sentence and legitimately wonder if I was referring to the cretins or the other cretins.] They are professional and amateur champions of hate and abuse. When they come to mind they always seem to bring Winston's words back to me, "If Hitler invaded Hell, I would at least make a favorable reference to the Devil in the House of Commons." When it comes to loathsome it's hard to choose between Palestinians and Norwegians.


The Egyptian authorities are demolishing hundreds of houses along its impoverished border with the Gaza Strip to create a buffer zone that will slow the flow of weapons and militants between the two territories.

Army officials told residents in the eastern Rafah area to evacuate their homes on Tuesday. They later confirmed that they planned to empty more than 800 houses – home to about 10,000 people.

I like Palestine because it uniquely demonstrates exactly what happens when low information (stupid) people with excessive energy and enthusiasm for violence are allowed to misrule themselves and never grow up.

There was an interesting photo essay today about the Baron Hotel in Aleppo.  It is hard to believe that this is going on at the very heart of where civilization first flourished. Thousands and thousands of years of recorded history surround this tiny area that once belonged to the Phoenicians and Alexander the Great and Rome and this is what they do with it. 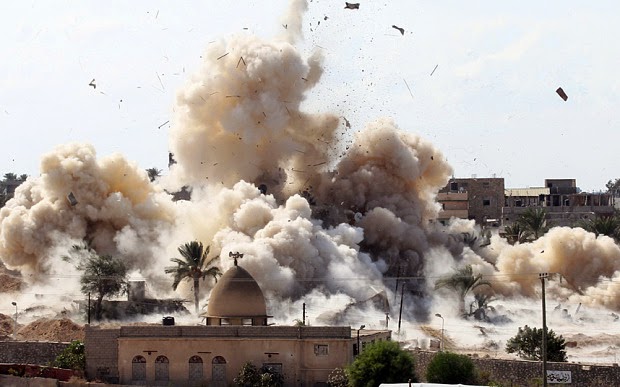 They put me in mind of a Prussianism that I think I first read in one of Jerry Pournelle's writings. I went looking for it. It took about .00000001 picoseconds to find it using google.


Field Marshal Erich Von Manstein (1887-1973), arguably the Wehrmacht's best World War II military strategists who was dismissed from service by the Fuhrer in March 1944 due to frequent clashes with him over military strategy, later articulated Field Marshal Moltke’s model in the following quote:

If I was the kind of person to pigeon-hole people and be all raysist I might assert that Palestinians don't fall into any of these categories. One might think hard-working and stupid, but no.

One does have to wonder why the cretins at State slobber all over them and want to have their babies. Still, there's an egress for every single one of them.....it's just through this door over here.
Posted by HMS Defiant at 4:30 AM
Labels: bright and shiny as the truth, stupid and vicious