It appears that the most segregated schools in America are found in New York.

NEW YORK (AP) -- New York state has the most segregated public schools in the nation, with many black and Latino students attending schools with virtually no white classmates, according to a report released Wednesday.

Thanks to policies put in place in America, all of the negative racial trends were reinforced and compounded by progressive social theorists and politicians. They left nothing to chance as they worked year after year to increase ethnic divisions and make ethnic boundaries harder, more inelastic and almost impossible to cross.


In New York City, the largest school system in the U.S. with 1.1 million pupils, the study notes that many of the charter schools created over the last dozen years are among the least diverse of all, with less than 1 percent white enrollment at 73 percent of charter schools.

"To create a whole new system that's even worse than what you've got really takes some effort," said Gary Orfield, co-director of the Civil Rights Project and an author of the report.

New York City charter schools have been created by and cater almost exclusively to very specific ethnic backgrounds, race and genders. We have reached the point where self-segregation is the preferred option for those most in favor of forcing increased diversity in your society using every form of government coercion and compulsion; not to improve, but to make diverse.

The amount of money allocated to a school within a city or town is the same regardless of the ethnic and racial makeup of the student body. Even though there is parity in spending there is something other than money at the heart of school performance. The study is blunt: "the study suggests that New York's segregation is largely due to housing patterns, because housing and school segregation are correlated, but that it could be mitigated through policies intended to promote diversity."

Neighborhoods self select segregation now by making and keeping the price of all housing within some neighborhoods very high in order to exclude all of the urban poor. The real estate prices are extremely high and local ordinances are passed mandating high annual maintenance costs and of course, extremely high taxes. The only effort with regard to low income, multifamily and Section 8 housing within the neighborhood is frenzied activity to keep it out. Berkeley was a wonderful town to live in but watching the city council go berserk trying to keep low income housing out of Berkeley of all places was a delight to me. OK, that and somebody's war on Berkeley's parking meters.

You see, whatever they profess, the people living in those neighborhoods suspect that they have been lied to about the benefits that they receive by embracing diversity. That's why real estate websites focus on the school associated with every dwelling within a school district.  Parents need to know because it matters.

The map below shows just the public schools. They are all located in the Huntsville School District. 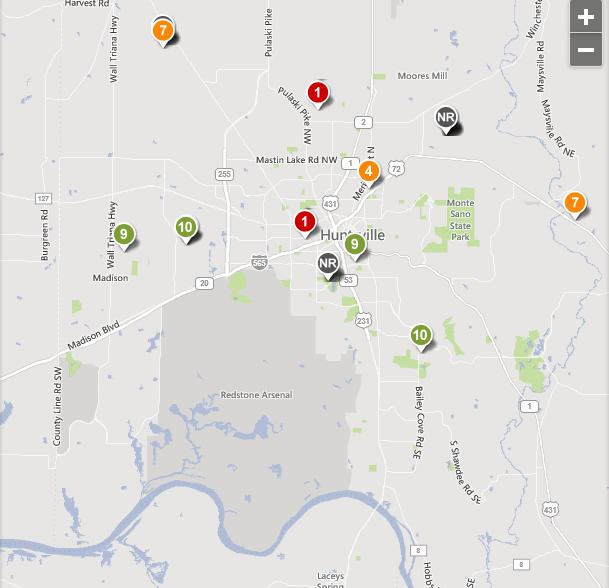 The hyperlink takes you to the zillow page I took the picture from. This was my old town when I went to high school. Note the student/teacher ratio at the very best high schools and the very worst. Not what you thought it would be, is it?

The study was dishonest but it was reliably so. They could not help themselves as they noted all of the schools in New York State and then declared that most of the non-white students attended schools with a tiny white minority instead of all schools having a student racial breakdown matching the statewide racial breakdown.

This also is my old neighborhood and where I attended my final year of high school. It is a fascinating map courtesy of the New York Times Census Taker. The map covers the entire U.S. and is well worth a look. Due to its large size, I could not fit a map of all of New York State but you can see it at the link if you like. New York is a large state but the racial makeup between NYC and the rest of the state is enormously different. The races are not distributed equally across the entire state.

I can't see the courts ordering the state to end school segregation with busing. Well, actually I can see a court ordering that. What an interesting place. 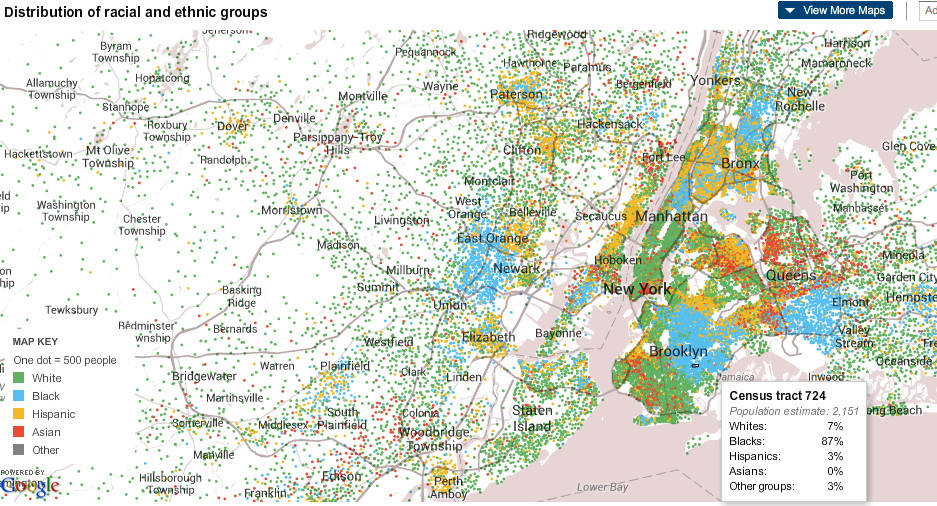 Posted by HMS Defiant at 5:48 AM
Labels: America, Education