FASCISTS YOU CAN RELY ON

Dateline:
Heart of the Dark Realm

It will surely come as no surprise that the EU dictator (unelected) has denounced the referendum of the people of Crimea in the strongest possible terms and has vowed to oppose it to the last drop of American blood if that's what it takes to restore non-democracy to the Crimean Peninsula. France and England are saddling their horses and preparing for Round Two of the Crimean War.

Europe needs to be very careful how they step into irredentism. Bravely taking the opportunity to poke Russia in the eye for a perfectly normal and acceptable coup-de-main over Russian territory is one of the more irredeemably stupid behaviors we have come to expect from Europeans. Every single inch of Europe is contested. That's why they perfected ethnic cleansing.

The herd of Europe should have quietly lined up before Putin and asked him nicely to not be blatant about exercising Russia's preeminent authority in Crimea. All things considered, Putin did a masterful job of allowing the people united to speak for themselves. He was helped in this matter by the nasty bit of extermination carried out in the last century which saw to it that the native people living in the area were all appropriately rewarded for zealous exercise of enlightened self-interest. I cannot recall who said that we should all fight together or surely we shall all hang together. Wars have consequences and letting the Bolsheviks win because you couldn't be bothered to oppose them? Big mistake.

There is another warm water Russian port in Europe although I think I am using a most liberal interpretation of the word warm in describing the Baltic Sea. In this purely Russian Port in the former Kingdom of Prussia, there are almost no irredentists because that would have reflected poorly on the NKVD. Those guys were pretty thorough. 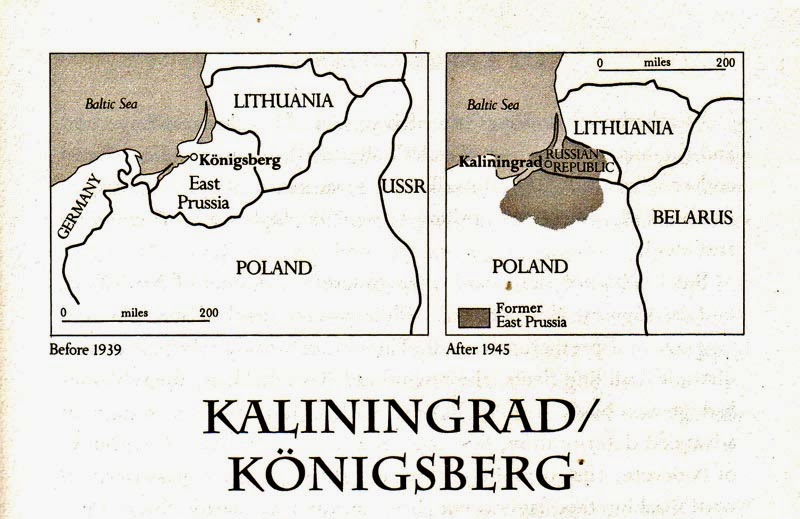 The right of self-determination is not new for our friends in Europe. They simply persist in not believing in it until someone makes them. I look forward today to seeing the results of the freedom referendums in Venice, Spain, Gibraltar, and later on, in Scotland.

It will be interesting to watch the establishment of the new Hanseatic League and its predestined struggle with the creaking State regimes who will have to prove a lot more nimble or more Russian to cope with the new Robber Knights. Still, Progress!
Posted by HMS Defiant at 6:30 AM
Labels: cartography, civil government, International Relations