SHOOT THE LAPD. IT'S THE ONLY WAY TO BE SAFE

This is disgusting and outrageous.

The LA Police Commission refused to discipline or fire any of the police scumbags who shot up town and  found that given the high priority location to which they were assigned, the officers "were equipped with inferior firepower and were at a significant tactical disadvantage." It said they should have been deployed with patrol rifles and possibly slug shotguns.

Nevertheless, the murderous little police scumbags opened fire on a lady delivering newspapers on February 7, 2013. An officer claims he heard a sound like a gunshot and immediately opened fire. 7 other police scumbags, unable to see clearly into the vehicle, blasted the pickup truck with 103 rounds, hit seven nearby homes and nine other vehicles with gunshots and shotgun pellets.

Unarmed Margie Carranza suffered minor injuries and her 71-year-old mother, Emma Hernandez was shot in the back. In April, the city agreed to pay Carranza and Hernandez $4.2 million. The agreement was in addition to a separate $40,000 settlement for the loss of the pickup truck.

If you are routinely carry a weapon when you're out and about, you should give serious consideration to doing the responsible thing the next time you see an LAPD officer pull his weapon out, and shoot him before he has a chance to shoot 2 innocent people, 7 nearby homes and any other idiot police officers in range of his weapon.

For your own sake, take away the moron's bullets if you won't take away their guns or at least swap them out for snub nose 38's and don't let them have more than 5 rounds on patrol. Thank God these idiots are such incredibly lousy shots. Can you imagine the carnage if they knew how to fire their weapons and hit what they aim at? 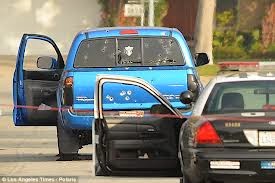 LA, you could eat a handful of slime and puke a better police force than what you've got.
Posted by HMS Defiant at 2:28 PM
Labels: America, American royalty, cannibals, social war