I have a raft of these. I look through them from time to time and think about how different the world back then was from the world today. In many ways nothing has changed between then and now. I think that perhaps the point of departure between civil discourse and ugly hate was more refined a hundred and fifty years ago but I could be wrong. There are whole topics today that one cannot even hint at discussing without inviting some really ugly and mean critters into the house. We decided early on that our rules here would be the rules of the mess. We eschew the ugly and the mean.

There are words most dare not even breath lest some idiot take them down to the foundry, cover them in molten metal, and then swing them most enthusiastically at one's head. It strikes me that much of the innerverse has become a series of closed tidal pools which are excessively intolerant places and where the occasional dissenters get eaten alive. I particularly noticed this in some of the book forums where there is literally no civil discourse. I accept that. It's easy to allow people to find their own ways to damnation and people these days generally take the freeway.

One would really like to believe that the preachers and practitioners of the worshipful voice were out there on the Sabbath preaching the unifying theory of togetherness, all God's creatures, we can all get along, but sadly, I know that's a lie.

I don't believe that the major moral movements that made America have completely flamed out. The flickering candles still appear at the odd little rally of hopeful types who join John Brown and his abolitionists in believing that if enough of the sovereigns in this country get together and unite, they can pass laws that will rebind this country to the moral path they believe was laid out for it at its founding. They don't realize that a judge will just toss out the law. They want to heal the world, heal the nation, heal the sick, comfort the poor, educate the illiterate, save the unborn, abolish slavery, end the war. You know, all the things that the Church used to do

These people are at the fringes of society where they are hanging on grimly so society doesn't entirely cast them out as society has been trying for just about always. Some of them are kooks. Some are idiots. Many are the worst sort of orcs and trolls. Quite a lot are saints and the kind of people you pray to come by and offer a hand when you need help. Unfortunately, many have become tainted and stained by devotion to unworthy causes, unsavory science, and addicted to every dollar you ever made in your life. Everything you have is theirs and they'll suffer to let you have only so much of yours as they see fit.

Everybody declares that the best approach is compromise but surely they don't mean that because if they did, how monstrous is that? There is dead and there is alive. There is no place that straddles life and death. How exactly would you compromise with the great evils in the world? Many people thought that Compromises and Treaties were just the thing to keep everybody happy...except the ones who saw all they had and ever would have, traded away for Peace in our Time.

This envelope still contains the letter that was mailed over a 150 years ago. It was mailed before computers and zip codes and it passed through a country fully engaged in a Civil War and yet see how it is addressed: 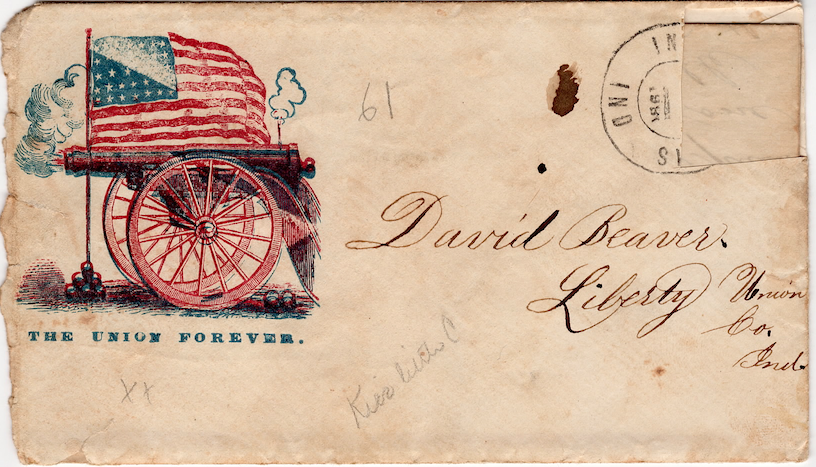 Every man knew his neighbor. This was addressed to a man using only the county and state for his address and it made it there without delay. Seemingly all of the letters mailed by this man's young son made it to his home. It was enough that the letter make it to the right county. Imagine getting a letter today addressed to you by name and nothing else but the county you live in. [This might be worth spending whatever it costs to mail an actual letter and finding out if it ever shows up at your door.]

I don't think our country is ripe for any kind of civil war. Nope. I think if some parts of it wanted to secede right now, many of the rest would get behind and push. In a way, I admire the folks of Great Britain. What other kind of fools would allow the Act of Union to be torn asunder by the vote of one half of the Union without counting the votes of the other members of the Union and yet turn about and deny the whole of the Union, the right to vote on staying within the Concert of Europe?  I think if I was English that I would hire me some ACORN managers to organize the turnout in support of division.
Posted by HMS Defiant at 8:30 AM
Labels: America, Civil War letter home