We're not as smart as we think we are.

The phenomenon was first tested in a series of experiments during 1999 by David Dunning and Justin Kruger of the department of psychology at Cornell University.[1][2] The study was inspired by the case of McArthur Wheeler, a man who robbed two banks after covering his face with lemon juice in the mistaken belief that, because lemon juice is usable as invisible ink, it would prevent his face from being recorded on surveillance cameras.[3] The authors noted that earlier studies suggested that ignorance of standards of performance lies behind a great deal of incorrect self-assessment of competence. This pattern was seen in studies of skills as diverse as reading comprehension, operating a motor vehicle, and playing games such as chess or tennis.

One trips over the damnedest things on the web. Read carefully.* 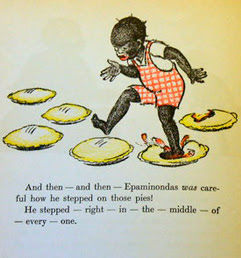 *I think I may be the last person in America who grew up with this on the bookshelf. It passes belief that this perfectly ordinary book, like Aesop's Fables or The Bobbsey Twins, survives in this day and age.
** I saw this evil film twice in Fort Riley when I was a Tenderfoot. (yep, I dindo a ** above. I like alert readers!)
Posted by HMS Defiant at 12:34 PM
Labels: Lunar Climatology, memory