It's just a little thing I know and not much of a bother to anybody important so we shouldn't care but aren't you tired of reading about and hearing about all these places that have been hit by stupid metal thieves who will trash a million dollar house for the $200.00 of copper wire they'll get when they rip it from the walls and sell it to an honorable scrap merchant? I am. Oh sure I enjoy the stories about the really really stupid thieves that neglect to turn the power off before setting themselves alight but that should probably be curtailed too.

All this moronic posturing for gun control and yet I've never seen one single person (nor even a married person) stand up and demand that scrap metal merchants be licensed by the state and be inspected daily and have solid requirements to prove where every scrap of scrap metal came from. How hard can it be to find these purveyors of stolen goods?

Officer Bob, "nice load of manhole covers you have here clearly marked Washington DC Municipal Water System. Who sold them to you?"
Scrap merchant of death, "why I got them from a saintly little lady who represented herself to be the DC Congressional Representative's daughter the honorable dealer in metals herself."
Officer Bob, "prove it."
Merchant of scrap death, "why that's impossible! There is no way to prove who owned this stuff I bought as scrap!"

I realize that it is way too demeaning to demand that voters use verifiable government issued photo ID in order to vote but still, voters need them to get on aircraft and they need one to get into a courthouse and they need one to cash a check. It's really too hard to get scrap merchants of death to make a photocopy of every seller's photo ID and check the national database of licensed purveyors of scrap?

Oh OK. Probably 85% of the sellers of illegally procured scrap work for the municipal, state or country government and have ID but still there must be some way short of electrocution to rein in this trade in deadly metals. 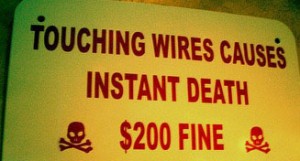