If this works out as it probably will, it make their tragedies, our tragedies.*


President Obama will announce Tuesday that the U.S. military will take the lead in overseeing what has been a chaotic and widely criticized response to the worst Ebola outbreak in history, dispatching up to 3,000 military personnel to West Africa in an effort that could cost up to $750 million over the next six months, according to senior administration officials. 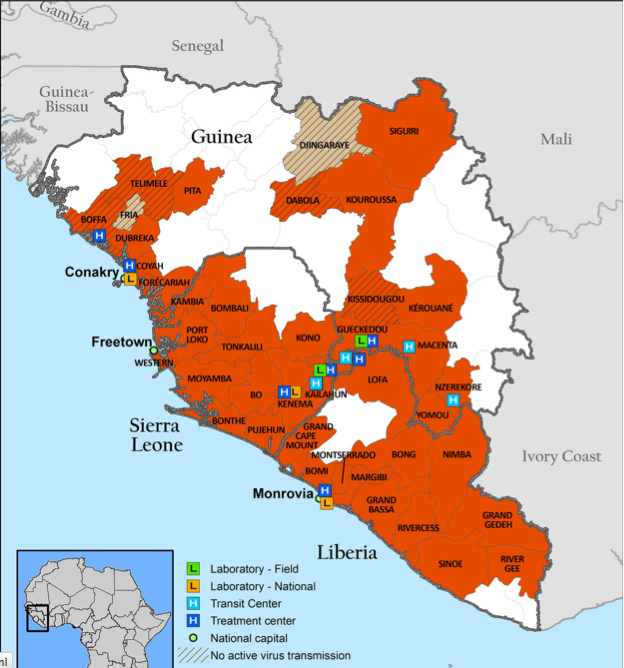 Nobody in the U.S. military today was drafted. All of the people the President plans to send to wage war on a disease in Africa volunteered and swore to obey the orders of the Commander-in-Chief. I suspect that there will be a few people who suddenly decide that they didn't sign up to wage war on disease and refuse to deploy. I wonder if the media and Democrats will lionize them the way they got behind and supported the handful of losers who decided to refuse President Bush's order to deploy and wage war on this nation's enemies in the Middle East.


“It’s this broad range of capabilities together that will turn the tide of this epidemic,” said one senior administration official, who along with others spoke on the condition of anonymity in order to discuss the president’s plan in advance of Obama’s trip to the Centers for Disease Control and Prevention in Atlanta on Tuesday.

It will be interesting to see how the Army carries out an aggressive campaign to help stem the tide of a disease nobody understands and which has defied all answers for decades about where it comes from each time another rare outbreak is recorded. I really hope that the Army sends a man like Colonel Gorgas to Liberia and gives him the resources needed to set up the simple aid that we mean to provide.

I suspect that there will be mission creep since that historically happens 100% of the time the military is deployed to combat any single problem. I have enormous sympathy for the men and women and their leaders who will be deployed to provide humanitarian assistance once more in Africa. I think it is safe to say that they will pay a very high price for another abysmal failure to help Africans. I cannot recall a single military relief expedition to Africa that ended well for the power that dispatched it or for the Africans it was sent to support.

It's going to be horribly ironic when we send armed troops to protect the 17 treatment facilities and in the span of seconds commit more armed soldiers of the United States to the defense of our humanitarian medical mission in west Africa than we dreamed of sending to support our diplomatic Mission in Libya before we let our Ambassador there get dragged off and murdered on 9/11/2012 by people we expected to attack us on that date. Meaning absolutely no offense to anybody, I really hope they send the USMC to provide security.


The Marines, from the outset, took a hard line with the police and
others in authority. This was done to ensure force security, and to
establish a safe and secure environment. On the day they landed, the
Marine commander met with the Haitian police commander in Cap
Haitien and explained that the Marines would not tolerate beatings
and shootings of civilians. The next day, when a Haitian police officer
brandished a weapon in front of a crowd, Marines trained their rifles
on him. The Marine confrontation with the police in Cap Haitien
culminated in the firefight on the 26 September that left 10 Haitian
policemen dead.

Read the article I linked above and linked here again. It describes humanitarian operations carried out in total anarchy using the forces of the United States and it was an easy bitter pill to swallow after our humanitarian intervention in Somalia. As this was playing out with my east coast counterparts finally doing something and deployed to Cap Haitien, I was deployed with Inshore Undersea Warfare Group One's Immediate Response Team supporting Operation Southern Watch on Faylaka Island among the deserted ruins there under the OPCON of Joint Task Force Middle East and struggling mightily to stay out of the clutches of the 4th US Infantry Division "Joint" Task Force Kuwait then in residence at Camp Doha, Kuwait.

Our connection to the rest of the world while on the island was limited. We were just about the last High Frequency termination that Navy Communication Station Pacific ever supported. Every four or five hours we had to remind the sailors at the ComSta in Hawaii that they needed to keep our termination going 24/7 until WE said shut it down. It appeared to us that with every change of the watch in Hawaii, for months, some supervisor said, "shut it down because I'm morally certain we don't need to copy message traffic or the broadcast to them over HF."

Even so, we heard about the USMC patrol that felt ambushed/bushwhacked by some armed Haitians and instantly responded by killing them. I thought that it was significant how that calmed the violence all around the places patrolled by the USMC in contrast to the areas patrolled by the 10th Mountain and later the 25th Infantry Divisions in other parts of Haiti. The General agreed, but he felt that the ROE was more binding on the Army than it was for the USMC.

One of the things professionals found MOST irritating about Rumsfeld was that he decided that he alone could decide how much manpower any particular mission in Iraq or Afghanistan required and he drastically limited it beyond reason. I can see right now, at this second, planners are telling upper echelon civilians in the Pentagon and Foggy Bottom that they need to send enormous numbers of force protection soldiers armed with a deadly serious set of Rules of Engagement and they're meeting enormous pushback from cretins who think that soldiers always opt for the gunslingers even for the simplest humanitarian mission.

Remember how NASA idiotically quarantined the astronauts wearing spacesuits the entire time they were on the moon after they returned to earth? Would you care to bet on whether or not the JTF in Liberia is going to quarantine anything or anybody before sending it back to the US? Back when I deployed 'force packages' to east Africa we simply complied with the USDA rules on reentry of hazardous materials and we burned everything that touched the ground in Kenya, Somalia, etc since the contagious things living in the ground there are deadly. We washed the living hell out of the handful of equipment we did deploy and repatriated to CONUS. It was an enormous one time pain in the ass-each time we rotated units out of Africa.

I would like to thank our soldiers, sailors, marines and airmen for the sacrifices they will be called to make during the next few years in west Africa. 21 days of quarantine following return to CONUS is going to suck worse than the mission because we all know some REMF do-gooder is going to decide to limit their only food service to shit and their wasted time to learning more about the Triumph of the Will and Marxist cant on Global Warming for non-believers.

I know that some of these people will be riffed while in quarantine and some chucklehead at the Pentagon will order them to be instantly removed from quarantine for immediate out-processing and separation from the service.

So, we're lining ourselves up to spread Ebola like the black plague during the Middle Ages; what's our plan for victory?

*I wrote this based on nothing more than news articles from the largest tellers of tall tales and outright lies in North America outside the offices of CBS, NPR, MSNBC and the Huffington Post. In short, I wrote it based on crap from the New York Times and Washington Post. If the lightworker does not perform according to the strict and exacting standards of the editors and publishers of the Ministry of Truth, I may well leave this up anyway. You should go ahead and reread the link from the Center for Naval Analysis.
Posted by HMS Defiant at 12:25 PM
Labels: Palace News