Another good man has stepped into the clearing at the end of the path. Vice Admiral Eugene P. Wilkinson died 11 July, aged 94, in Del Mar, California. In August 1953 he was assigned to USS NAUTILUS (SSN-571) to be the Prospective Commanding Officer of the first nuclear powered ship in the world. Following the commissioning of the ship on 30 September 1954, Commander Wilkinson put the ship through the first nuclear acceptance trails in the navy and achieved a historic first on the morning of January 17, 1955, at 1100 hours EST, when he ordered all lines cast off and signaled the memorable and historic message "UNDERWAY ON NUCLEAR POWER", to the Submarine Force Commander. His biography is here. 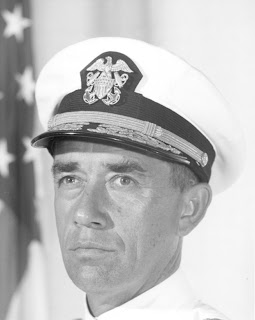 He spoke at the 50th anniversary of getting underway on nuclear power. Well worth reading. It gives the reader an idea of just how lightning fast the changes were in the navy following World War II. Guided missiles fired from submarines, nuclear propulsion, submarine launched intercontinental ballistic missiles... Admiral Wilkinson also served as the first Commanding Officer of the first nuclear powered surface warship, USS LONG BEACH (CGN-9).

I think in an era of remarkable naval officers he probably stood at the zenith.
Posted by HMS Defiant at 1:41 AM