AMERICAN EXPRESS AND ME

I was a traveling man back then and I would always reply with a 'yes of course' when the Commodore asked me if I'd be willing to drop everything and go do some sight surveys and attend some conferences in Thailand or help out Naval Forces Korea or even lead an Air Detachment to Bahrain for further transit by land and sea to an island off the coast of Kuwait for a couple of months. A lot of this travel was back-to-back and most missions lasted 1 to 2 months. As a consequence, I seldom saw my mail.  One day while taking the sun at my place in Faylaka Island, Kuwait, I was called to the mess tent where I was told our Chief of Staff was on the INMARSAT phone and demanded to speak with me. I wandered over to the phone.
"Curtis," he said, "the Commodore and I are both very angry at you because you are in arrears paying your AMEX bill." All delinquent bills were reported to the member's gaining command. I observed as how I had just got back from two months in Egypt and was asked the next day to lead the Initial Response Air Detachment to Bahrain and hadn't gotten my mail from the post office yet. The Commander assured me that this was no never-mind and my bills must be paid.  I told him that not only hadn't I gotten my mail but I hadn't been to the office and so hadn't filed any travel claims yet either and I hadn't been paid for 4 months. He muttered something about bills needed to be paid and hung up.
We kept on with the American Express card for all sailors and had the same sort of thing happen thousands of times. It was deeply stupid. I read later that the officer in charge of the program misused her card to the tune of buying new houses, cars, appliances, etc and never paid the bill. Nothing ever happened to her though. I used mine for official travel but when I was in command I told my people I literally didn't care what they bought with the cards as long as they paid the bill promptly. That worked for my 2 years in command but after that the admiralty changed the rules and started clamping down on card use for non-official purposes.
I stopped using the government issued card after I got back from Kuwait. Turns out it's use wasn't required; just strongly desired. 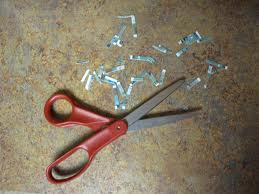 Screw that.
Posted by HMS Defiant at 1:37 PM