We went to to see the Tall Ships at the waterfront in MetroParkCentralis today and on the way home we passed though Case Western Reserve University and Wade Lagoon. As we drove by we noticed that something was missing. 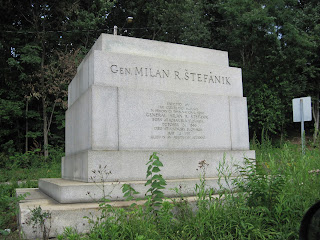 The statue commemorating General Milan Stefanik was ripped up and removed from its home of 89 years because that's what one does if one is a filthy rich city. I don't expect it will ever again see the light of day. There are not more than 10 people in Cleveland who even know his name or why there was a statue of him there in the first place so I see it as unlikely that there will be the follow-thru to re-erect the statue in a more Slovak appropriate place within the city.  Just about the only thing left in Cleveland of the old eastern European communities that once made this city their home are the enormous beautiful churches and the cemeteries they left behind.
When those fiends in the Taliban decided to blow up the giant statues of Buddha they didn't have to do that. I don't think there was a valid reason to rip up General Stefanik either. Of course, if they are going to chop up the little round-a-bout there that leads visitors up to the Cleveland Art Museum and Severance Hall, well, of course the statue must go. It's like the non-stop arguments in San Diego where some jackass 'philanthropist' wanted to rip out the Veteran's Memorial in Balboa Park and eliminate all driving and parking in the park itself except for him and his friends. His supporters kept it alive for a decade shouting, "Progress Demands It!"
Posted by HMS Defiant at 6:25 PM