That was the mantra of the navy missile defense world back in the Cold War. We didn't have a lot of ammunition but we sure as hell didn't want one of these 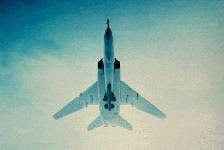 hitting us or even exploding within a mile or two so we liked to be thorough. That huge missile under that huge bomber is an AS-4 nuclear armed anti-ship missile with a 350-1000 kiloton warhead.

It's probably time to employ that tactic against the police. They seem a hell of a lot more interested in their safety than they are in the safety of anybody else.