I saw an interesting item in the news the other day about Egypt getting upset with Ethiopia because Ethiopia is building a dam on the Blue Nile. The Egyptians are concerned that this might somehow interfere with the flow of the waters through the Nile River Valley in Egypt. As you might suspect, such an effort is bound to come to the notice of even our Department of State and get leaked in one of the massive leaks of State Department documents. 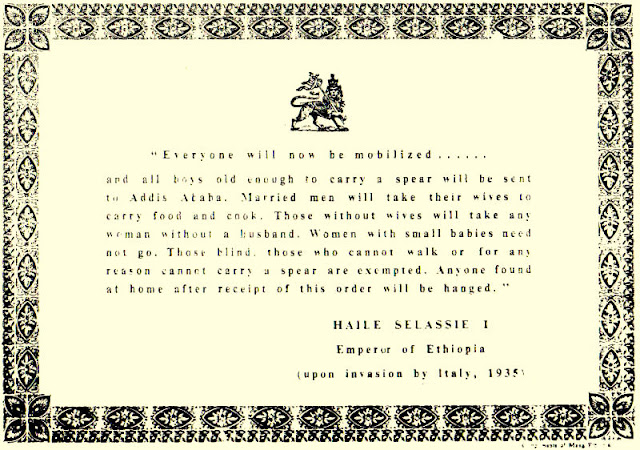 This was written on a plaque we had hanging in the wardroom of the Middle East Force Flagship when I lived there in 1984. I have no idea how it got there but it implies that we had some sort of meeting with Ethiopian forces under the command of Haile Selassie. An interesting item from a landlocked country to be found on a warship in the Indian Ocean.

Ethiopia is the oldest independent country in Africa and one of the oldest countries in the world. According to some: Genesis 2:10-14, "Ethiopia is the land of Cush surrounded by the river of Gihon which flows out of the garden of Eden"

I believe the Italians were the last "civilized" nation to use poison gas as a weapon of war. Against men and boys armed with spears, the Italians with tanks, machine guns and airplanes were compelled to use gas.

Back when I was at Naval Forces Central Command we had some pretty high hopes for both Ethiopia and Eritrea in the aftermath after Mengistu was overthrown and the Russians dislodged but the history of the region quickly began to resemble that of Poland between the Wars.
Posted by HMS Defiant at 6:30 AM