The states of the Union shown in shades of green believe that the "State" compels the union to go along with any little thing that the "State" holds as lawful and that the "Union" can go screw itself.
As I recall, that was the basis and even the foundation of the entire complete War Between the States. The state government of South Carolina was so disconnected from reality that it ordered its troops to open fire on Fort Sumter because, "states rights.

UPDATE: It looks like the US Attorney General has decided to enforce federal law on drugs after all. 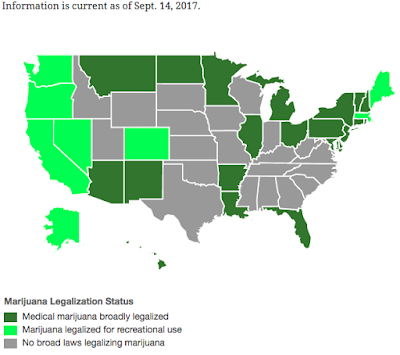 I suspect that it will be California that fires the first shot in the next Civil War because, LGBTQ, dreams of aliens, and general overall Democratic stupidity. You remember the Democrats right? They were the party that ruled the South for generation after generation and opened fire on Union soldiers manning an American fort in the United States of America back in 1861. You might have read about it or seen it on tv.

We're not looking so united anymore are we?

It's interesting, to me, that Dixie is holding out and letting the revolt pass them by. Illinois on the other hand, hasn't yet figured out a way to monetize the legal sale of pot that will put all the proceeds into the hands of the state employee unions or the government's coffers.

I will offer this bit of wisdom, once you go green it's a slippery slope and you can never look back again when the next little bit of monstrous legislation passes the bar. I played that game in California once upon a time when the Cali Southern Air Quality Board was given access to a US Military Base and informed me that it would fine me $1500.00/day for each diesel generator of more than 35bhp. I told them to get lost since the laws that governed us were federal laws and not the BS that Sacramento passed off as law.

My so-called chain of command bailed on me. They promptly took all my 30kw generators and shipped them out of state and replaced them on a one for one basis with utterly worthless 15kw generators. I pointed out that the SCAQB didn't convince the USMC Tank Platoon co-located with us to get rid of their M60 tanks or any of their other diesels. My chain of command worked really really hard to earn the contempt they so justly merited from just about everybody.
Posted by HMS Defiant at 6:01 AM
Labels: America, Blithe Spirits, News, Zeitgeist