READING MATERIAL FOR AN ENDLESS WINTER

I found this intriguing place while writing the previous post. What can I say? It makes for interesting reading. It's a photo of the books on the Shackleton Expedition that became trapped in the ice and foundered there. I make the assumption that the odd pipe is the Charlie Noble and heated the space, at least a little, when the galley fires were lit. 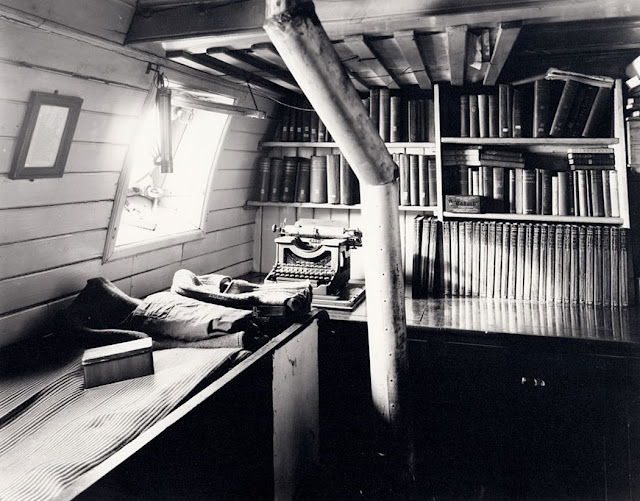 The library, seen above in a photo by expedition photographer Frank Hurley, has been decoded for the first time-the Royal Geographic Society, working with Dutch digitizer Picturae, rescanned and analyzed the photo and was able to read the titles of the books for the first time.

In addition to Greely’s sad story, Shackleton carried the Encyclopedia Brittanica, plays by George Bernard Shaw, The Brothers Karamazov by Fyodor Dostoyevsky, and a lot more. The books, unfortunately, went to the bottom of the sea when the Endurance broke apart and sank on November 21, 1915. As most of you know, all 28 men survived.

Here’s the full list of books in the library:

Encyclopedia Britannica
Seven short plays by Lady Gregory
Perch of the devil by Getrude Atherton
Pip by Ian Hey
Plays: pleasant and unpleasant, Vol 2 Pleasant by G B Shaw
Almayer’s folly by Joseph Conrad
Dr Brewer’s readers handbook
The Brassbounder by David Bone
The case of Miss Elliott by Emmuska Orczy
Raffles by EW Hornung
The Grand Babylon Hotel by Arnold Bennett
Pros and cons: a newspaper reader’s and debater’s guide to the leading controversies of the day by JB Askew
The Brothers Karamazov by Fyodor Dostoyevsky
The Woman’s view by Herbert Flowerdew
Thou Fool by JJ Bell
The Message of Fate by Louis Tracy
The Barrier by Rex Beach
Manual of English Grammar and Composition by Nesfield
A book of light verse
Oddsfish by Robert Hugh Benson
Poetical works of Shelley
Monsieur de Rochefort by H De Vere Stacpoole
Voyage of the Vega by Nordenskjold
The threshold of the unknown region by Clements Markham
Cassell’s book of quotations by W Gurney Benham
The concise Oxford dictionary
Chambers biographical dictionary
Cassell’s new German-English English-German dictionary
Chambers 20th Century dictionary
The northwest passage by Roald Amundsen
The voyage of the Fox in Arctic seas by McClintock
Whitaker’s almanac
World’s end by Amelie Rives
Potash and perlmutter by Montague Glass
Round the horn before the mast by A Basil Lubbock
The witness for the defence by AEW Mason
Five years of my life by Alfred Dreyfuss
The morals of Marcus Ordeyne by William J Locke
The rescue of Greely by Commander Winfield Scott Schley
United States Grinnell Expedition by Dr Kane
Three years of Arctic service by Greely
Voyage to the Polar Sea by Nares
Journal of HMS Enterprise by Collinson

Photo via the Royal Geographical Society

I suppose that all of the crew were glad they weren't playing tag with the Germans on the Somme by the time they got back and read up on the early days of the Great War. It remains interesting to wonder how many of them survived the Great War after wintering over in the Antarctic.
Posted by HMS Defiant at 1:00 PM
Labels: epic tragedy, Exploration, sailing, Sea Stories