MISCONDUCT IN THE LAW HAS NO PENALTY 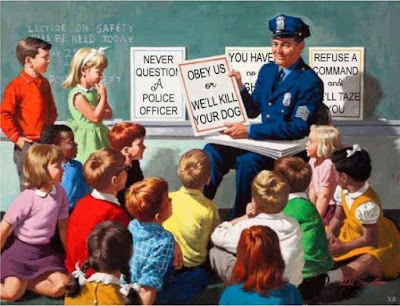 There is too much truth to this graphic depiction of what the police have turned into during the course of their War On Drugs. They took every single one of your rights as an American citizen and chucked them under their Urban Riot Control cast-off ex M60 tank and that includes your right to bear weapons for your own defense and your right to .... well, let's just say all of them.

In return they have given you the citizen what, exactly?

Was it worth giving up your rights as a citizen of a Constitutional Republic?

After the fiasco the judge decided to share with the public what she thought of the utterly corrupt and contemptible District Attorneys involved and all the Federal and local cops involved in the attack on the Bundy's.


Nevada rancher Cliven Bundy could have spent the rest of his life in jail, but instead he walked away Monday a free man, the case against him and his sons thrown out over what the judge decried as “outrageous” misconduct by federal prosecutors.

In a stunning rebuke, U.S. District Court Chief Judge Gloria Navarro scolded the prosecution for violating the due process rights of the four defendants — Cliven Bundy, his sons Ammon and Ryan, and Ryan Payne — and dismissed the case “with prejudice,” meaning they cannot be retried on felony conspiracy and firearms charges stemming from the 2014 Nevada standoff.

“The court finds that the universal sense of justice has been violated,” said Judge Navarro, appointed to the bench by President Barack Obama in 2010, as reported by the Arizona Republic.