It still strikes me as damned funny that Trump enjoys so much support from people like me and that the hapless stupids of the GOPe cannot figure out why he has such massive support over such obviously born-to-the-purple louts like Rubio and Bush. The GOPe still doesn't understand that we are all delighted to finally have a candidate who espouses the kind of policies that we can support. Not all of them mind you, and not all the way, but that is the very essence of politics. You give a little and you compromise but the GOPe morons have continuously defaulted to the democrat position on every single issue and then bargained away our birthright wholesale from that starting point.

Trump at least, has announced that he is prepared to take Paris by making clear his intent to seize the English Channel and overrun the low countries on his way to take London. The dimwits like Boehner, Mitchell, Ryan and McCain made it clear that they were going to stop when they got to the Rhine and maybe, just maybe, Strasbourg.

I think it's gratifying to see the stir this approach has created on the Marxist and Socialist Fronts, the Wall Street Front and even the vile Fifth Column made up of the foul material of the Fourth Estate. There is plenty of time for Cruz to pull out a convincing win but he still has the same problem that Trump has. The party they aim to be the standard bearer for, hates them even more viscerally than democrats hate them. 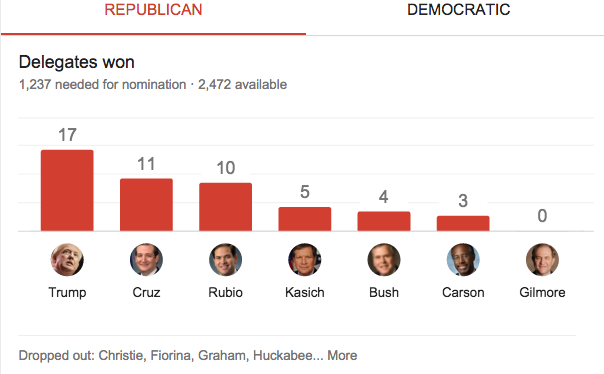 Good times! :) It is so much nicer to be at the front end of the nomination process and not dragging up the rear with California where you only get to vote for the pathetic idiot left standing after all the other states have winnowed out the decent candidates. If I'm going to be represented by a mean, petty, ignoramus, I'd like to at least get a chance to vote for one who knows how to rend and tear apart my enemies.
Posted by HMS Defiant at 4:15 AM
Labels: America, shiny, Yeah