They fall fast the generation that survived a brutal interregnum in their lives. Another 7 years in the wasteland of North Vietnam, but came safely to the clearing at the end of the path,

Colonel Fred V. Cherry, an Air Force fighter pilot, was downed by enemy fire over North Vietnam in 1965, and he spent more than seven years as a prisoner of war. He made it home. For certain values of home. 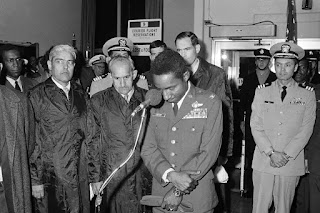 He was a man who survived the worst sort of demons. I could describe the betrayal he suffered at the hands of the Air Force, but won't. I have enough belief, there is a clearing at the end of the path.
Posted by HMS Defiant at 12:42 AM
Labels: Air Force, end of the path