Another good man has stepped into the clearing at the end of the path. He was an originalist and my kind of jurist. I had a great deal of respect for the man. His dissents were always gleaming towers infused with the shiny majesty of the Constitution and the written meaning of the words that were used in its creation. He did not skulk around in the shadows hiding in the penumbras of an unwritten constantly evolving document. He upheld the basic law of the United States.

He was a man of the middle America. His most diseased enemies often referred to him as 'right wing' as if somehow any jurist or American who clearly stood by the actual Constitution was somehow on a "wing" of extremism. He recognized that America has just one extremist wing which makes it a rather lopsided but no less dangerous beast. The only extremist we have to fear here is tyranny and there is only one wing of tyranny left over the mind of man that satisfies those who believe that they alone have the power to compel their fellow citizens to bend to their will. People who support and defend the Constitution are not extremists anymore, they are Americans. They stopped being extremists when America shed its King and created its own nation. 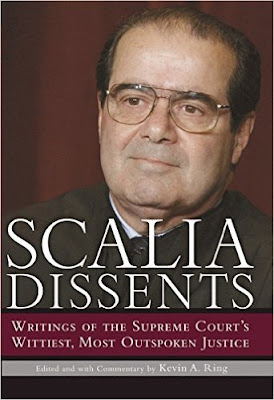 Hail and farewell.
Posted by HMS Defiant at 12:05 AM
Labels: America, Blithe Spirits, end of the path, News