It's been a month now since two boat loads of incompetent Navy boobs cravenly got down on their knees and surrendered their heavily armed and instrumented patrol boats to the Iranian Revolutionary Guard Navy (IRGN). I thought for sure that by now we'd hear the real truth about what happened and also learn that the Commanding Officer and several others had been relieved for, "loss of confidence" in their ability to command. Imagine my surprise to find that the Navy still doesn't have a problem with the disgraceful events of that day and has fired nobody.

Navy Expeditionary Combat Command has fired almost 20 Commanders and Commanding Officers since it sprang into existence under Rear Admiral Bullard on 14 January 2006, but in this case it cannot seem to find any fault with anybody's behavior on the boats, at their parent command in Kuwait or the Task Force Headquarters in Bahrain or with their home station command in San Diego. That is awesome! Over 20 officers sacked for loss of confidence because of personal foibles but people who bring great shame and disgrace are here to stay.

The Navy's failure to take any action publicly means that: Coastal Riverine Squadron THREE, Coastal Riverine Group ONE, Commander, Task Force 56, Navy Expeditionary Combat Command and Commander, FIFTH Fleet find that the training, preparation, readiness, material condition and navigational abilities of those two crews were up to snuff and in no way departed from the standards expected by the United States Navy.

That means that the United States Navy tacitly approves of the actions of the sailors pictured below and approves the methods used to train them for their responsibilities.

This is Iranian Navy Ship Sahand in the Persian Gulf on my second deployment to the Arabian Gulf. 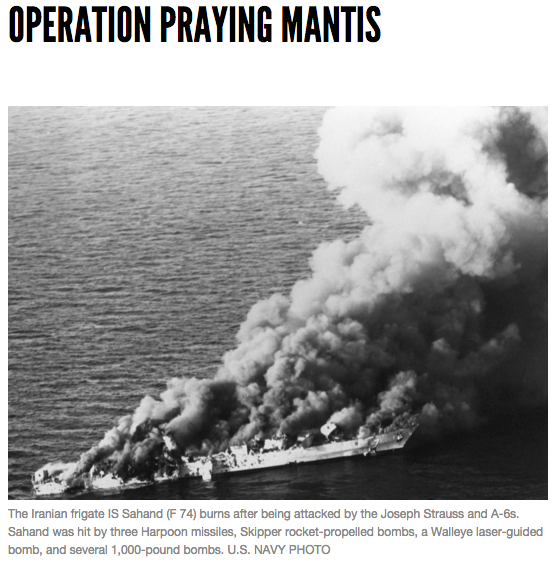 Note what the Iranian patrol boat did when it was challenged by a US Navy cruiser and two frigates:


The Iranian patrol boat Joshan ignores radio warnings and approaches SAG Charlie. About 45 minutes later, Joshan fires a U.S.-made Harpoon missile — the remnant of a pre-Revolutionary arms purchase by the Iranian shah. Some 13 miles away, the U.S. ships fire chaff and dodge the incoming weapon. They return fire with Harpoons and Standard missiles, sinking Joshan in the world’s first missile duel between warships.

Joshan never hesitated, nor did the frigate Sahand. He got warned off three times and pressed in to launch an attack he knew would doom his ship. The thought of surrender never entered their minds and they never did.

I was sure that by now we would know what really happened at Farsi and learn that those involved had been fired. I really don't know this navy anymore that will remove all access to classified material from the top two Navy Intelligence admirals for two years while incompetent idiots investigate their involvement in a bribery scheme that happened 5 years ago and in which the defendant is cooperating with the government. How could it take two years without resolution, I wondered. Well, now we know. In the absence of an existential threat we have let the admirals select only officers like Dorsey for promotion to Admiral. What other explanation can there be for things like Littoral Combat Ships, the ongoing Intelligence Fiasco and this craven surrender?

In September of 1987, while US Navy forces were boarding and capturing an Iranian minelayer in the Persian Gulf, Dorsey was flying a training mission above the Mediterranean Sea and used the opportunity to deliberately shoot down a United States Air Force RF-4C Phantom. In 2012, a board consisting of Navy Admirals decided that Dorsey was made of the right stuff and selected him for promotion to Admiral. They have been doing a very poor job for a long time of selecting navy officers with integrity and competence for promotion to admiral.

In the words of another U.S. Navy patrol boat sailor:


"I can imagine a no more rewarding career. And any man who may be asked in this century what he did to make his life worth while, I think can respond with a good deal of pride and satisfaction: 'I served in the United States Navy.'"

It will take decades to repair the damage Admiral Vern Clark and his followers did to the Navy.
Posted by HMS Defiant at 7:00 AM
Labels: ambiguity, integrity, Stupidology, USN