A LESSON EVERY DAY

I saw this tonight and was struck, not by the violence which it purports to show via red dots in each state, but by the interesting note at the top of the map. It reads that, "Delaware, Maine, Vermont, West Virginia and Wyoming were excluded from the FBI data because these states do not have cities with populations of 100,000 or more."

Isn't that a remarkable thing? One in ten states don't have a single city with a population of 100,000 people living there.

You all are much to young to remember the old Club of Rome and the doomsayers of the '60s who pretended that the world was doomed to end before the 21st century because too many people, too little food, oh doom. Almost 50 years on and we have way more people; over 121 million more than were living in America back when the Club got rolling in 1968 and we still have five states without more than a big town among them. 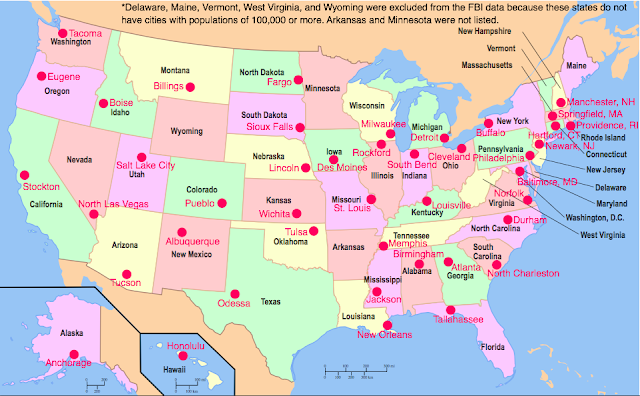 Posted by HMS Defiant at 12:55 AM
Labels: America, Discovery, Education