The Preamble to the Constitution lays out what the Government is for and somehow our government has lost sight of the very few things it is on the hook for providing. Let's review, shall we? 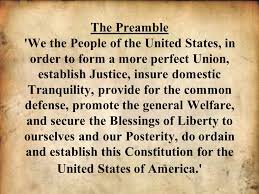 Pretty simple, right? Let us take it from the top. We the people decided what the damned thing is for. Let's set aside the reason and see where we stand on the deliverables.

1. Establish justice. Pretty much a one shot deal. Create, elect, appoint, staff and enforce law through legislation and courts. Done

3. Provide for the common defense. An abysmal failure.

4. Promote the general Welfare. A contentious debate that died out in 1973 when it was killed by the courts who decided that the people were not entitled to rule on such matters. The Court rules by decree.

5. Blessings of liberty to ourselves and our posterity. A most dismal failure. At some point all of the world's poor, idle, indigent and lunatics became our posterity.

As an ordained Constitution, I confess the current state of the Constitution is starting to resemble a divorced lesbian Agnostic Episcopal Bishop.