I copped this from traditional vibe. 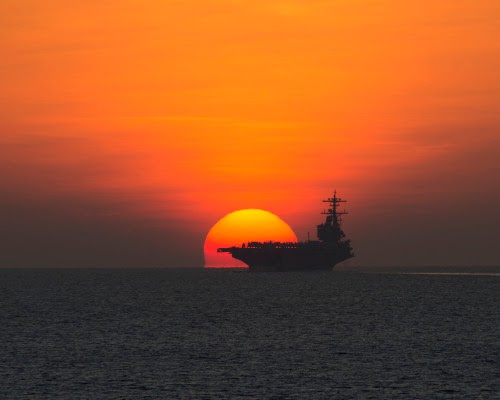 A ship like that has an enormous crew to make it work and propel it through the sea. It has an air wing to give it the potency everyone ascribes to aircraft carriers. It also has a cruiser or two and a destroyer or two to give it some defense against submarines and air threats that get past the air wing. It also has, you can see it just over there in the gloom on the right, a submarine in direct support.

These little bits of America are afloat in every ocean and some seas and gulfs. We don't have as many as we used to have but the world is a safe and stable place which has little need of our Navy today. The last time I looked 6th Fleet consisted of an Admiral's Barge and a landing craft or two.

I used to go for runs at someone else's base overseas where they had Styx missiles on sticks. They were all over the base. Right around then, the Navy decided to permanently station aircraft carriers within the Persian Gulf. The thing about Styx and all its follow on cousins is that they could be launched from a truck on the shore. They were subsonic short ranged missiles that might be able to go 299.95 miles. How wide is the Gulf? Styx cost about $999.99. One would shoot one or one would shoot a flock of maybe a hundred at something like the picture above.

See, I remember Chuck telling us all at NAVCENT that there was no evidence of any terrorist in the Kingdom having access to hi-explosives just 3 weeks prior to Khobar. One day we will find out how good our ASCM defenses are and how good our terminal defenses are against wave attacks of scores of cruise missiles. Right around the time Iran figures out the bomb.

Right about then, Iran will declare a blockade and mine the Strait of Hormuz and the Battle Group will be trapped in the Gulf. One of the problems of sanctions is putting a country into a place where it has nothing to lose. Saudi has Yanbu but Kuwait and the Emirates are screwed. So is Qatar but they want that.

Can you see the US clawing our way back into the Gulf?
Posted by HMS Defiant at 2:42 PM
Labels: USN