I know, it sounds like a Farley Mowat title. It's worth noting when certain people pass. The New York Times took a little over 500 years to note the passing of Richard III at Bosworth Field. Because they are the New York Times, they gooned it.  If you read the interesting article about the reburial of an ancient King, note the last bit which I have captured here.

That theme was pervasive in the reburial service, perhaps captured best when Archbishop Welby, standing beside the grave as the coffin was lowered, invoked forgiveness for Richard. “We have entrusted our brother Richard to God’s mercy,” he said, “and we now commit his human remains to the ground, ashes to ashes, dust to dust.”

Correction: March 26, 2015
An earlier version of this article misstated the title of the most senior member of the royal family in attendance at Richard III’s reburial. She is the Countess of Wessex, not the Duchess.

With this article, John F. Burns concludes a distinguished career spanning 40 years with The New York Times, 39 of them with the international desk. Beginning with South Africa in 1976, Mr. Burns reported from 10 foreign bureaus and was chief of the Baghdad bureau during the American invasion and occupation of Iraq. Along the way, he wrote more than 3,300 articles and collected two Pulitzer Prizes for International Reporting, one in Afghanistan and the other in Bosnia. His portrait of a cellist playing on Sarajevo’s main pedestrian concourse while artillery shells exploded nearby is considered a classic of modern journalism. He will continue to contribute to the international and sports desks, among others.


Yeah, that's how I want to go out as a newsman, with a 'correction' for the sloppy journalism I got away with for almost 40 years.

Of course, you'd want some dignity to accompany your reinterment. Instead, you get: 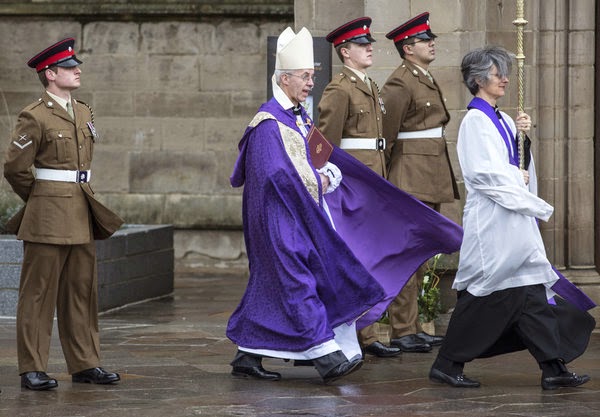 Posted by HMS Defiant at 3:03 AM
Labels: end of the path, Style and Grace