Congratulations America, we just traded this man for a friend of Obama and Biden.  A man who served two combat tours in Vietnam and left half his foot behind there has just resigned as head of the Veteran's Administration. Perhaps he was not the man we needed to head Veteran's Affairs these days but that doesn't negate my earlier argument; we will never find a better man to head the Veteran's Administration. Whatever else may have been going on, I think we can take it as certainty that no man will have his concern for wounded and injured veterans.  If we are lucky we end up with someone like Gorelick.

The general will be replaced by a former politician. But wouldn't it be nice if Mr. Mattis was available? 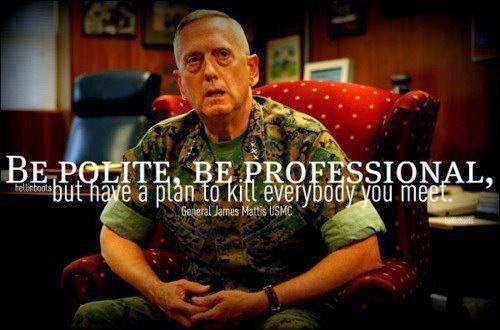 The problem with that is that the Secretary's support staff is about as scary as a can of tuna. I accept that and maybe we CAN have a VA clinic in Adak staffed by 27 SES, 210 GS-15, 548 GS-14's, 159 doctors, 121 nurses and 2,399 clinical staff. There are plenty of Quonset Huts still there, left over from the War. Throw in the surly cafeteria and catering staff and I think they'll all be deliriously happy to stay in their positions on the government payroll.

The real problem is that nobody can fire the worst, punish them, or transfer them against their wishes. It's a management problem with a solution. An elegant solution might be that all staff must use the VA for all medical and make it an instant firing offense to "jump" the line.
Posted by HMS Defiant at 1:36 PM
Labels: America