Some researchers took 351 years of
weather observations collected from the logs and reports of ships sailing the world's oceans and data from research buoys and animated it using Google maps. Collecting surface observation weather information was one of the things that warships did for centuries. As with anything that gathers dust, researchers started mining the data once they found the central records repositories and realized what was there.

I remember the first time I saw the power of detailed routine maritime observations when a retired Navy captain showed up on one of my ships with an early laptop computer and a program he called GFMPL. The Navy's Geophysics Fleet Mission Program Library had the data from many, if not all, of the hundreds of thousands of expendable bathy-thermograph (XBT) buoys used by the US Navy as its warships characterized the ocean's sound velocity profile.  Each of them recorded temperature vs depth over their recording range (about 1000-2000 feet). The primary purpose of the information was to find the deep sound channel and acoustic layer below which submarines could not be detected from the surface.

The GFMPL model merely contained the Sound Velocity Profile information that historically prevailed at a given coordinate at a given time of year over the course of decades. It let you plug values into the Sonar Equation even when you had no first hand observational data. You would not believe how helpful/critical this can be. The study of sound in water matters deeply to navy officers. There are ways to find submarines but the worst approach, bar none, is shown below. It is better if you use sound looking up their kilts or from aircraft they cannot reach. 1 vs 1 in ASW these days is not for the timid. 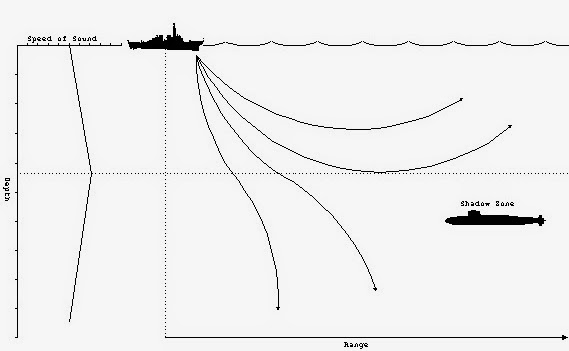 The picture represents the active ray path of a destroyer type ship hunting a submarine using active SONAR. Where it became personal though was using active SONAR against mines floating in the volume. When the ray path was pretty much straight down it was a good day to go back to bed. There wasn't much point in hunting mines with SONAR if physics suggested that it was taking the day off.

A few years after I left off all that, I ran across an article about a Lieutenant of the Navy who had suffered a crippling injury that prevented him from ever serving at sea again. We don't have a word for that anymore although for a long time we thought we did. Some people like to think that we keep people on in the Navy because they're pretty smart not because of how good they look in Ray Bans. Like the sound velocity profile though, that changes every day.

This was also the origin of the navy's entire geophysical data project. A naval officer named Matthew F. Maury, banished from life at sea due to a debilitating accident, found himself at the Naval Observatory and by location, custodian of the central repository of all logbooks from the Navy's ships. He found that he could transform his exile from the sea into a wonderment by taking the composite of all the weather and marine observations of generations that was slowly moldering away and turning  it into useful guides known as Sailing Directions. 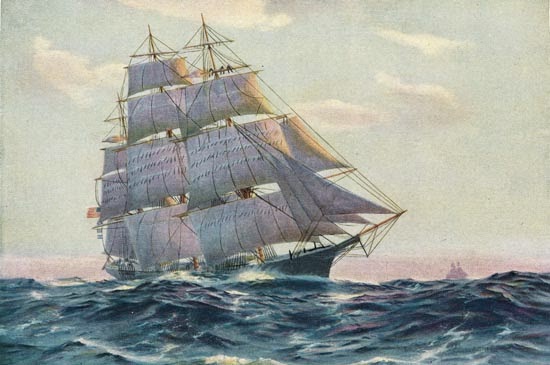 Long before RADAR we had a means to guide mariners in their closest approaches to shore. I was looking for the old Charlie's Charts which used pen and ink drawings of approaches throughout Baja which I remembered from sailing there as a young Lieutenant on a 40 footer but this will do in lieu of that:

You would have to sail a thousand miles at sea to appreciate how much a geography of your desired landfall means if you want to establish your whereabouts in the pre-GPS/RADAR era. Yes, all landfalls look the same in the dark but we don't make landfall in the dark do we? No. No we most assuredly don't. We head back out to sea and live to enjoy landfalls with Mimosas in the morning and a light heart. Finding Cabo Falso unexpectedly at 0200 when the Fathometer stops working all of a sudden....not the place for sudden demonstrations of sang froid. We can do it, but no. Just saying.
Posted by HMS Defiant at 11:00 AM
Labels: cartography, Exploration, Science