ON BREXIT AND OUR IMMIGRATION DILEMMA

Samizdata put together an image that pretty much describes exactly the dilemma that Britain finds itself in as it attempts to wrestle away from the dead grip of the European Union. It makes it very clear why it is proving so hard to enforce the will of the people. 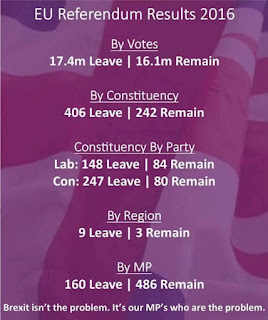 Somebody with the inclination could probably produce a schematic much like the one above and show that most Americans, most of America and most of the States want this flood of illegals with no visible skills to end and end now. Then we could just look at who keeps voting to frustrate that policy in Congress which is where year after year the will of the people in this regard has been tossed out on its ear or ignored altogether.

One of Samizdata's commenters mentioned a phrase that became quite popular a few years back.


“You have sat too long here for any good you have been doing. Depart, I say, and let us have done with you. In the name of God, go.”

Free month of reading this blog for anybody who knows who spoke the words quoted. I was going to say the same for the origin of samizdata but it's a little obvious.
Posted by HMS Defiant at 5:31 PM