NOTHING BUT A LIAR

He lied his whole life and this is merely to document it.

Five years ago to this month, former director of national intelligence James Clapper lied to Congress, and he has been scrambling to make excuses for the ongoing lies and leaks ever since.

In March 2013, Sen. Ron Wyder asked Clapper under oath if the U.S. government was collecting “any type of data at all on millions or hundreds of millions of Americans.” Clapper paused and said, “No, sir. … Not wittingly.” Three months later, Edward Snowden leaked documents revealing that the National Security Agency was in fact collecting in bulk domestic call records and other various internet communications on millions of Americans.

This was the first of many “untruths,” as Clapper likes to call them. Here are other lies Clapper has cooked up since trying to explain his false statements under oath.

1. He Lied Because He ‘Simply Didn’t Understand’ The Question
In an apology letter to Sen. Dianne Feinstein written about four months after the hearing, Clapper said he gave the “clearly erroneous” answer because he “simply didn’t think of” the call-record collection.

Even though Clapper had received the committee’s questions the day before his testimony, he maintains he did not realize that Wyden was asking about Section 215 of the Patriot Act, and was answering a question regarding a different program, specifically Section 702 of FISA.

“I didn’t realize what he was talking about,” Clapper said at the University of Chicago last May. He repeated the lie again to CNN’s John Berman on Tuesday after news broke that the Trump administration is planning to end the NSA’s spying program.

2. He Lied In the ‘Least Untruthful Manner’
Clapper told MSNBC not that he didn’t understand the question as previously explained, but that Wyden’s question about whether the NSA spies on Americans was a gotcha question equivalent to, “When are you going to stop beating your wife?”

“I responded in what I thought was the most truthful, or least untruthful manner by saying, ‘no.”

3. He Lied to Congress About Leaking Details On the Steele Dossier
A report from the House Intelligence Committee published last May shared that Clapper had leaked to CNN’s Jake Tapper details of a briefing regarding the Christopher Steele dossier given to President Obama and then-President-elect Donald Trump.

“Clapper flatly denied ‘discussing[ing] the dossier [compiled by Steele] or any other intelligence related to Russia hacking of the 2016 election with journalists,” the committee wrote. Clapper then backtracked when asked specifically about his discussions with Tapper. “Clapper subsequently acknowledged discussing the ‘dossier with CNN journalist Jake Tapper,’ and admitted that he might have spoken with other journalists about the same topic.”

To recap: Clapper leaked information about the dossier briefing to Tapper, lied to Congress about leaking, and was then given a contributor contract with CNN a few months later. As Mollie Hemingway reported, these lies would all eventually prove to be a set-up scheme by Clapper and then-FBI director James Comey to give legitimacy to the fabricated dossier.

4. He Lied about His Communication with CNN
In an attempt to run interference for Clapper’s lies to Congress, The Washington Post fact checker unknowingly published yet another lie from Clapper. In a statement to the Post, Clapper said, “The first time I had any interaction with Jake Tapper was on May 14.”

This statement conflicts with both the statements Clapper made to the House Intelligence Committee, and what House Democrats said in their own report about how Clapper talked to Tapper while in office.

We know that President Obama was briefed on the dossier on January 5, 2017, and President-Elect Trump was briefed on January 6, 2017. The transcript of the congressional intelligence committee’s interview of Clapper exposes that his communications with journalists revolved around those January briefings.

HOUSE INTEL: Did you confirm or corroborate the contents of the dossier with CNN journalist Jake Tapper?

MR. CLAPPER: Well, by the time of that, they already knew about it. By the time it was — it was after — I don’t know exactly the sequence there, but it was pretty close to when we briefed it and when it was out all over the place. The media had it by the way. We were kind of behind the power curve, because the media, many media outlets that I understood had that, had the dossier for some time, as did people on the Hill.

Clapper acknowledged that he spoke with Tapper “pretty close to when we briefed it,” which would have been in January. Once again, Clapper is caught in a lie about his previous lies.

The question is, why are the lies continually excused? As a federal employee who lied to Congress, Clapper received a free pass from Barack Obama’s FBI. As a private citizen, he gets paid to spin his own crimes on television. Clapper is a serial fabricator who can’t even keep his own lies straight.
James Clapper lying to us again for the umpteenth time.

One could leave it by simply pointing out that he is demcrat and so lies come naturally to him. 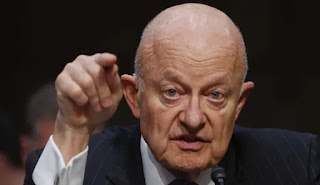