The major problem facing America today is not the Russians or the awful NORKS, it's the electoral divide that has locked this country into a spiral of disdain and hate. You can see the distribution of out and out hatred in this one picture. 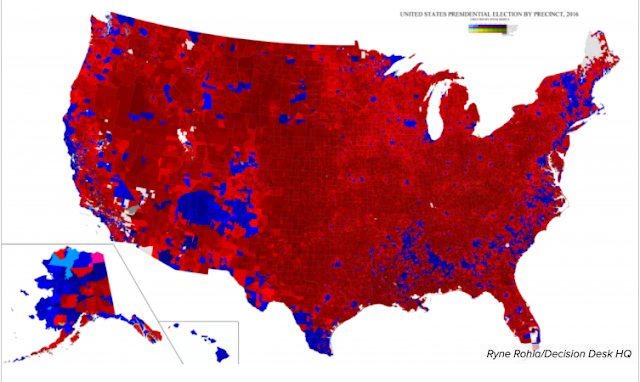 What it shows us is that democrats, and there's a lot of them in spite of what one thinks from simply looking at the picture of their distribution above, have a problem ruling over the red areas. They are incompatible with the traditions, beliefs, and mores of the people who live in the red areas. When the very urban democrats seize power, they promptly set about doing their damnedest to destroy the ways of life practiced by the folks living in the Red America. You see it with every piece of legislation they pass, every bureaucratic rule they make and enforce and with every breath of air they take and then use to denounce coal, oil, logging, hydro-electricity and dam building, agri-business, genetically modified organisms (GMO) and every single other activity that non-office workers do to make a living in modern America. They hate nuclear power, gasoline engines, diesels and only permit windmills if they are all located in the Red Zone where true blue democrats don't have to see or be bothered by them.

The problem is that they cannot stop themselves. They cater to the stupidest and most destructive policies since the Luddites roamed Great Britain during the Industrial Revolution. They believe in fake science with a passion that has to be experienced to be believed. They believe in magic healing crystals with the same fervor that they believe in man made global warming and that we can reverse it if we simply return to the agrarian lifestyle they cannot abide from the Americans living in the Red. They are simply the most credulous and viciously stupid people to come down the pike since the SS.

In contrast, the people in the Red don't much care for, but more importantly, care about, what the idiots in the blue areas do except for 2 areas that are of concern. In California and Texas they determine what goes into every single student text book in America because those two states buy the most text books and the book writers/sellers have to cater to the largest market. That sucks for obvious reasons. The other two Blue zones are Washington DC, home of the weaponized federal bureaucracy and New York City where the thieves and shysters run the national banking system according to the whims of whatever bureaucratic tsar is put in charge of Wall Street and the various judicial weapons of mass destruction that attack Wall Street and the Banks (SEC, FTC, Federal Reserve, etc).

The people that live in the Red and represent them in Congress don't pass legislation that inconveniences or tosses the blue losers out of their jobs, their industries, their houses, etc. They pretty much try to legislate without making it a point of honor to destroy other people's livelihoods and way of life. The Blues tend to legislate the way their ilk did back in the 1800s when the goal was to expand their way of life westward and kill anything that got in their way and own slaves forever and ever.

I'm afraid it looks like the Reds are going to have to control the weaponized bureaucracy in order to deal with the Blue people. It is passed time to overhaul the Civil Service and terminate all government unions and make those jobs 'at will.' I'm looking forward to how Justice Gorsuch will deal with the various CHEVRON cases making their way through the judicial lawfare course enroute to the Supreme Court.
Posted by HMS Defiant at 6:30 AM
Labels: America, bore-sighted on the future, social war