SEE WHAT THE SOCIALISTS CREATED TODAY

It is utterly predictable but the fascist little socialists totally misunderstood who they are dealing with. The nationalists are nothing like the TEA Party. The nationalists are out for blood and they want to see the bad guys who hate America and American values and the Constitution pay for the crimes they have been committing and getting away with for over a decade now. The socialist fascination with their mental image of getting away with going out and punching a nationalist in the face led to the 'unexpected' creation of a force to stand up to them and beat the crap out of them when they show up to riot and attack peaceful Americans celebrating their right to free speech and their right to peacefully assemble or engage in other lawful activities that the police no longer offer protection to.

Sucks to be them.

The fascist little shits are going to run into these guys from now on. When you look at the reports that detail how many of the protection forces came from more than 50 miles away purely to be there in order to protect the peaceful demonstrators, you can appreciate that there are a lot more patriots than there are filthy, vicious, and insane scumbags who like to beat up girls.

I think it's interesting that others are observing the predictable fallout of a government and a police force that have refused to stand for democracy and refused to enforce the law. Where the government isn't and where the police are afraid to weigh in, the people will act as they see fit. 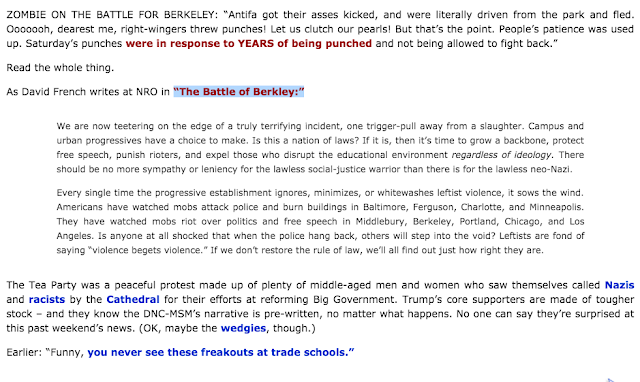