I was one of those who laughed out loud as I watched the wretched media tear into Trump for his tweet last month that claimed that the Obama administration was using the intelligence community to spy on him and his team during the campaign. Oh how the worthless media all clubbed together to spike that tweet and slam Trump for his fabulism and pathetic world of make-believe. Remember?

That little tweet was 'signalling' in the old style. As you recall, our State Department (mostly Kissinger) and JFK, LBJ and Nixon, all believed in signalling via B52s. Their message sucked, the delivery was rude and the meaning subject to misinterpretation. They sucked at signalling. Trump nails it.

Trump had to do very little follow up as the results are in and they're pretty conclusive. The Obama administration DID spy on him and his friends and fellows and probably all the other rethuglican candidates before they were outstumped by Trump. There's no ifs ands or buts about it. Yes, yes, Rice will take the 5th or find the same convenient inability to remember anything that was first explored by Hillary in her testimony to Congress about the massacre in Benghazi but the smoking gun is still lying there right in the middle of the carpet in the Oval Office.

I think Trump should carry on with his tweets. Any student of civilization will be able to look back in ten years time and point to the signals he sent via the 140 characters allowed by twitter and clearly identify the outcomes of each carefully couched sniper shot into the body politic. Hell, I may even sign up for twitter just so I can follow Trump and see what's coming next.

I listened to the Dark Side this afternoon when I was out picking up Chinese food and they, as usual, carefully selected a guest who loathes Trump, Republicans and mid-westerners and bounced their twitty little questions off him as their reliable sounding board for how all people in the world think about the evil, vicious, no good, dirty rotten scoundrel Trump. The only question/answer I had the patience to hear was about how Trump really pissed off all the Germans by telling them that they need to honor the commitment they made of their own free will to spend 2% of their GDP on defense. To hear the Drooling Orc of Harvard, it appears that only a complete idiot and moron would do something to piss off our dear allies in Das Reich because, allies dontchyaknow.

Srsly, with allies like that, who needs enemies? Come to think of it, we're gonna build a Maginot Line of our own here on our continent and the Wisconsin National Guard could defeat Canada's armed forces in a weekend. We don't really need to keep expeditionary armored units larger than a Marine Expeditionary Unit and we'll just let the good people of Europe explore their sudden urge to speak Russian in the wake of the FYDP they aren't funding for themselves.

I know a lot of the putative armchair naval strategists of our time have been ginning up all kinds of reasons to expand the fleet and increase the number of warships because China but that's kind of a no-brainer since we are still pretty much unable to beat China in China's hemisphere. The last time the West won in that part of the world was the Boxer Rebellion (and Japan but that took nukes). The various countries around China will dance to China's tune because they have no choice. It's not that the Chinese PLA would win a war overnight but they have what's known as infinite depth in manpower, weapons and will and the various countries around China hate and distrust each other even more than they distrust China and could no more form and maintain a mutual defense pact than Greece could ever pay off its debts.

So yes, despite all the best will in the world to never have anything to do with twitter, it looks like it is time to sign up and follow Trump. He is putting up signposts as he blazes a new trail through the wilderness that is international politics and diplomacy and also giving some darned good heads up warnings on where domestic policy is going to go in the future with his tweets. 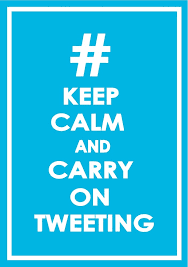