It's from the UK Daily Mail which, as it happens, I do look at every now and then because it's about the only paper that provides meaningful coverage to American politics. They do sometimes, get things a little wrong. In particular, they have peculiar ideas about Defense and Foreign policy as played on the international stage by a country with economic and military power and a complete indifference to anything said by any European.

This one took the biscuit.

I don't know who that Leon Pancetta fellow is, but he sounds like a dimwit. Panetta is probably outraged that the Daily Mail editors let a stupid mistake like this slip through and is calling his 'friends' at CIA to send a drone over to put a few Hellfire missiles into the editor's office window. 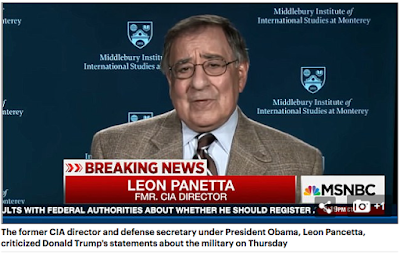