OUT OF THE DARK

I sailed the Pacific and Indian Oceans a lot. I flew over the Atlantic and Pacific Oceans more times than I can recall. I saw first hand how large the world is and that's down near the bottom of the atmosphere and along the top few yards of the seas. It's a very big place and it's all an enormous heat sink that our piddly efforts will not trouble at all. That is largely why I never believed in the global warming hysteria whipped into life by Al Gore and the Climategate scammers.

I stopped by Watts Up With That that tonight and found an interesting essay that was linked on the site. It was written by a warmist who looked at and examined all the facts without flailing his arms and legs about, jamming his fingers in his ears and screaming witlessly for hours. You might find it interesting. He has now seen the light.

1 Weather is not climate. There are no studies showing a conclusive link between global warming and increased frequency or intensity of storms, droughts, floods, cold or heat waves.

2 Natural variation in weather and climate is tremendous. Most of what people call “global warming” is natural.

3 There is tremendous uncertainty as to how the climate really works. Climate models are not yet skillful; predictions are unresolved.

4 New research shows that fluctuations in energy from the sun correlate very strongly with changes in earth’s temperature, at both long and short time scales.
5 CO2 has very little to do with it. All the decarbonization we can do isn’t going to change the climate much.

6 There is no such thing as “carbon pollution.” Carbon dioxide is coming out of your nose right now; it is not a poisonous gas. CO2 concentrations in previous eras have been many times higher than they are today.

7 Sea level will probably continue to rise, naturally and slowly. Researchers have found no link between CO2 and sea level.

8 The Arctic experiences natural variation as well, with some years warmer earlier than others. Polar bear numbers are up, not down. They have more to do with hunting permits than CO2*.

9 No one has shown any damage to reef or marine systems. Additional man-made CO2 will not likely harm oceans, reef systems, or marine life. Fish are mostly threatened by people who eat them.

10 The Intergovernmental Panel on Climate Change and others are pursuing a political agenda and a PR campaign, not scientific inquiry. There’s a tremendous amount of trickery going on under the surface*.

It's nothing really new, but he found his way into the light of reason just from examining the facts. As all facts unite to demonstrate, the arguments in favor of man-made climate change are nothing but pathetic stories told to frighten the stupid into parting with their wealth and freedom. The essay is well worth reading.

Something else to keep in mind. The people who want to steal the world's wealth to fight an enemy only they can fight are also fighting to keep billions of people in the darkness. That's not right. 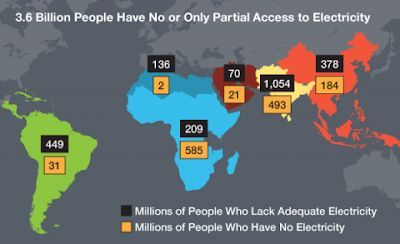 Posted by HMS Defiant at 6:00 AM
Labels: Atmospheric Science, bright and shiny as the truth, Climate, Climatology